This article has been developed from information contained in Rails to Rubicon (2nd Edition), Peter Evans (2009). Peter has been generous with his help in putting together both this article and the attached map of sawmills and tramlines. This map is designed to give you a picture of the location of sawmills and tramlines and, therefore, the extent of harvesting operations in the first half of the 1900s. For more precise navigation to specific locations you should use the maps in Peter's book. There is also a video available, produced by Peter, via the link below. Unless otherwise indicated all quotes are from Peter's book.

"The Rubicon Forest is situated on the northern fall of the Great Dividing Range approximately one hundred kilometres northeast of Melbourne. The nearest township of any size is Alexandra which, with the coming of the railway in 1909, became the focus of the timber industry in the region. The forest covers the Blue, Middle, Royston, and Torbreck Ranges. This high, wet forest is the home of vast stands of Mountain Ash (Eucalyptus regnans) and Alpine Ash or Woollybutt (E. delegatensis). Other species of commercial value are Messmate (E. obliqua), Shining Gum (E. nitens) and Manna Gum (E. viminalis). Early photographs of the forest show a sparse understorey of bracken and snow grass, quite different from the thick undergrowth present in most parts ofthe forest today."

"In May 1905, Messrs Clark and Kidd of Grant Street, Alexandra, applied for a sawmill site in the Rubicon Forest."

"In the company of Arthur Kidd, Inspector of Forests Daniel Ingle1 assessed the area for which Clark and Kidd's application was made, reporting: We spent the whole day riding through the forest. I don't think that there is a better quality timber anlwhere in the state. Personally, I cannot see how it can be made profitable unless the railway is extended from Alexandra Road, as the mill would be eighteen miles from a loading station and there are two stiff hills to climb."

The mill opened in 1907 and harvesting would have commenced at that time.

"The last major area of the Rubicon Forest to be opened for timber milling was the Snobs Creek valley." & "ln June 1933, Reginald John Barnewall and Michael Bernard Lee applied for a mill site and cutting rights in the valley of Snobs Creek." "The timber in the Snobs Creek valley had never been cut and was estimated by by Forester Gerraty to be of an average age of eighty years, almost certainly regeneraring after the Black Thursday fires of January 1851. It consisted of 60% Mountain Ash, 35% Alpine Ash, 4% Shining Gum and 1% Manna Gum. Some of the timber had been killed or damaged during the 1925-26 and 1931-1932 bushfires, and the best timber was in scattered patches."

Salvage operations following the 1939 fires were conducted in this Forest, and the last bush-located sawmills (related to salvage harvesting?) were removed in 1953 - "When the last bush sawmills in the central Rubicon Forest (Ruoak No.4 and No.5) were dismantled in April 1953, it ended an era begun by Clark and Kidd in 1907 when they opened their mill on the Rubicon River."

While harvesting continued, sawmilling operations generally moved into Alexandra after 1939. 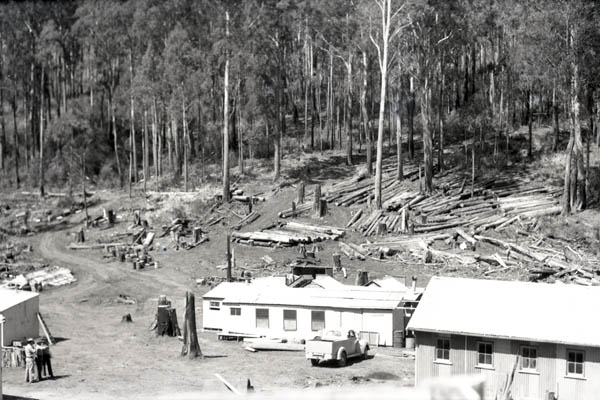 FCV Camp in the Rubicon Forest
(This could be the camp on the Rubicon, shown on the map, or it could be a camp on Snob's Creek.)
1946
Source: FCRPA

The Resource & the Norwegians

"The first accurate topographical maps of the Rubicon Forest were drawn in 1928 when an assessment of the timber reserves in the greater part of the forest was made. The work was carried out by Bernhard Johannessen2 in the Royston valley and Kristian Drangsholt in the Rubicon valley. Each assessor had a chainman and an axeman as assistants, and a camp was established near Clark and Pearce's Waterwheel Mill. The camp consisted of a hut and several tents. Base lines were surveyed and the forest divided into one-chain wide strips at five-chain intervals. This provided a detailed assessment of one-fifth of the forest area from which the total quantities of timber available could be extrapolated. In each strip, plots were set out in which the trees were counted, their age, condition and species noted, the volume of standing timber calculated, and an estimate made of their probable output of sawn timber."

"Data for the maps was obtained using tape, chain and compass. Steep slopes were surveyed using an Abney Level, and elevations at fifty feet intervals taken with an aneroid barometer. Twenty-thousand acres were surveyed, and the resulting contoured maps and forest assessment cost the Forests Commission 4d per acre. These maps were not improved until aerial photography of the Rubicon Forest was completed by the RAAF in November 1944, and the author can vouch for their general accuracy."

These are probably the first two surveys of this type conducted in the State, and they set the standard for future surveys for a long time to come.

As in other areas impacted by the 1939 fires, harvesting of regrowth ash stands has continued, and will likely continue until a planned discontuation of harvesting in all native forests by 2030. The image below (taken from Google Earth in May 2022, and at this time still visible on the Google Satellite and Google Hybrid map bases in the map linked above) shows very clearly the extent of recent harvesting.

2 Johannessen was one of three Norwegian foresters (Kristian Drangsholt and Bjarne Dahl being the other two) employed by the FCV in the late 1920s to provide expertise and experience in forest assessment. See: Assessment of the Forest Resource.