"The pioneering sawmiller of the gold rush era was Henry McGie of Ballarat who, in 1853, set up his first sawmill at Buninyong." 3
&
"The last major sawmill to operate on sawlogs supplied from the Wombat Forest was Black Forest Timbers Pty Ltd which closed in 2007." 3

"I have also the honor to report that during the year I carefully inspected the Bullarook State Forest and the large tract of forest extending from Daylesford on the north to Mount Wilson on the south, and during that inspection I met with many hundreds of acres of virgin forest, and where the axe of the settler is yet unknown. This timber consists principally of stringy bark and white gum forest, fit for mining purposes, and would furnish an immense supply if judiciously and economically conserved." 5


There are at least three good sources of information about the history of the Wombat Forest, and some extracts from those sources are provided below.

"The early colonization of Victoria was based on pastoral activities commencing around Portland in 1835. The discovery of gold near Clunes in 1851 saw the beginning of a series of major gold discoveries and the subsequent influx of miners throughout State, but particularly in central Victoria, around what is now Ballarat, Creswick, Bendigo, Maryborough, Castlemaine and Daylesford. Surface alluvial mining soon petered out and was followed by deeper and more sophisticated mines necessary to follow the gold bearing leads to increased depth."

"The source of timber and fuel to support the mines and towns was obtained from the apparently limitless nearby forests, which inevitably meant the box-ironbark and the low elevation mixed species forests. The rapid destruction of these forests, particularly in west-central Victoria, and the lack of control exercised by the Mines Department, prompted the Victorian Parliament to conduct an inquiry to determine if controls and regulations on forest activities were warranted. The inquiry 4 reported that timber cutters working for the mining industry felled the best trees and destroyed more than they used, producing unnecessary waste. In addition, it was common practice to strip bark from standing trees for cladding buildings, leading Ligar et al. 4 to conclude that if this practice was prohibited and the forests properly managed, there would he an abundance of timber to supply the mines."

"The inquiry concluded by proposing that large forested areas in west and central Victoria be reserved as State Forest 4. These forest areas were to become known as the Bullarook, Wombat, Mt. Macedon and Mt. Disappointment Forests and were later described as containing, in the virgin state, many clean stemmed trees, 12 to 24 metres to the first branch and 90 to 180 cm in diameter. The predominant species were messmate stringybark with narrow-leaved and broad-leaved peppermints, red stringybark, swamp gum and mountain grey gum." 5

"This reserve (known for many years as the Bullarook Forest) is situated in the counties of Bourke, Grant, Talbot, and Dalhousie. By far the largest area, however, is in the counties of Bourke and Grant, the forest extending along the slopes and foot-hills of the Great Dividing Range from Mount Macedon, on the east, to the neighbourhood of Rocky Lead, a station on the Daylesford and Creswick railway line, on the west."

"For a period of over 40 years Wombat reserves have been the main source of supply for sawn hardwood and fencing material to the Melbourne, Ballarat, Castlemaine and Bendigo districts ; and for a considerable, though shorter, period for laths, slabs, and mining props, to all the chief gold-field towns in the central district. From 1852 up to the year 1897 it is estimated that timber to the value of seven millions sterling had been taken out of it. Some twenty years ago the annual output of sawn timber alone was over 60,000,000 superficial feet, but in 1896 this yield had dwindled to 7,000,000 feet. The output for last year shows further signs of shrinkage, being only 4,450,000, and this includes several hundred thousand feet cut from logs obtained on private lands. Only eight mills are now established within or on the borders of the forest, and their yearly output ranges from 300,000 to 850,000 feet."

"We have thought it well to deal at considerable length with the present condition of this reserve, because from several aspects it must still be considered our most important forest. Its situation in the central district on both sides of the Dividing Range, the immense supplies of young timber which it contains, and the great repro¬ductive power of its principal tree (the messmate), wherever the influence of soil and rainfall is favorable, give it advantages which are not possessed in the same degree by any other reserve in the colony. Its value as a source of supply, in connexion with the development of mining in the central district, served as it is by three lines of rail¬way, can hardly he over-estimated, and for this reason alone the annual output of timber should be so regulated as to secure a continuous yield. But if the ravages of past years are to be repaired, and the forest brought to such a condition that it will furnish regular supplies of both milling and mining timber, strict conservation, together with the closing for a period of selected areas of the best immature timber to all cutting except improvement fellings, will be absolutely necessary."

Timber harvesting for sawlogs commenced in the Wombat forest in the 1850s and continued up until 2007. Houghton records the locations of more than 190 sawmill sites in and around the forest over that period. The vast majority (an estimated 75%) of the sites on which sawmills were located would have been occupied in the period from the 1850s into the early 1900s. (See Map) The scale and unsupervised nature of the early harvesting, which was similar to elsewhere across the Colony before Federation, meant that, at least in sawlog terms, the forest was exhausted by the early 1900s.

"Initially the timber in the immediate vicinity of Ballarat was cut out (1851-1856), and then the Warrenheip Forest fell (1856-1860), to be followed by the Bungaree and Dean forests (1860-1870) as the centre of operations continually shifted north-eastwards."

"The peak output of the Wombat was reached in 1878 when 138,000 cubic metres of sawn timber alone was produced from more than 40 mills."

"By the end of the next decade (ie the 1890s) the Wombat was officially described as a 'ruined forest' that had been gradually destroyed as a high forest and converted into a tract of stunted brush timber useful only for firewood and small mining props."

Concentrated improvement works in the form of thinnings helped the forest return to reasonable levels of productivity, although post-WW2 demand again increased pressure on the forest.

"Wartime conditions from 1939 to 1945 limited milling operations, and it was not until the war ended that the pressures returned and the demand for timber exploded. Suppressed economic activity due to the Depression and War had led in 1946 to a shortage of an estimated 90,000 houses in Victoria. All of the public and private forests in the state were looked upon as sources of supply for these dwellings."

"It was hard for these demands to be resisted in the forests, including the Wombat Forest. Political pressure from local municipalities, local politicians and the Returned Services League (for soldier sawmillers) saw many new mills given log allocations."

However, the market pressure did ease in the mid-1950s.

"In 1954 the entire Wombat Forest yielded almost 70,000 cubic metres of logs and while the District Inspector doubted whether this level could be sustained the market eased considerably and took the pressure off."

Although the harvesting level was increased by 10% in 1973, significant rationalisation of the sawmilling industry using the forest resource was underway.

The Timber Industry Strategy released in 1986 set a sustainable yield (SY) of 70,000 m3/yr of sawlogs for the Midlands Forest Management Area, which included a yield from the Wombat Forest of about 60,000 m3/yr. This SY was later adjusted downwards before ongoing community pressure opposed to native forest harvesting caused the Government to decide that harvesting would cease by 2008. 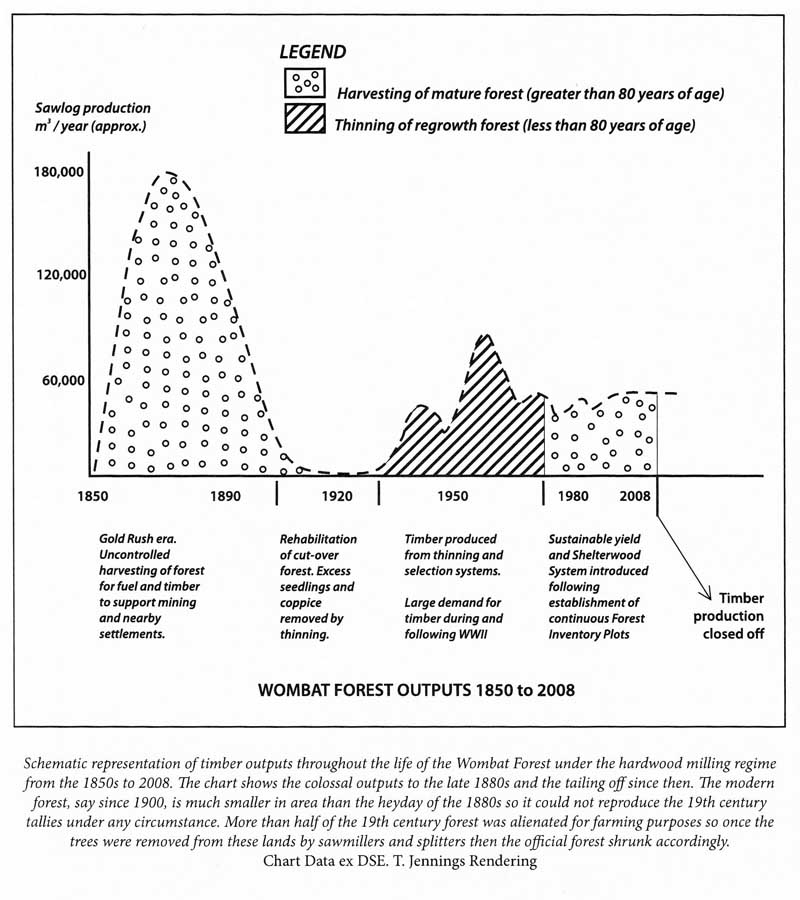 The illustration above (from Houghton) provides an excellent illustration of the fluctuations in supply from the forest from the beginning of harvesting in the 1850s until its cessation in about 2008. 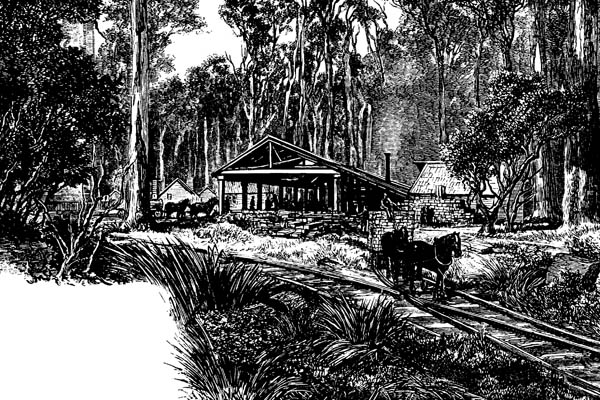 Some comments came with the sketch about inspecting a sawmill near Glenlyon - "of which there were no less than six in the neighbourhood." and ... "near the edge of the Bullarook Forest, whence immense quantities of timber have been taken during the past thirty years. Twenty-one saw-mills, employing some three hundred hands, are at work in this forest, ..." (Source: Unknown) 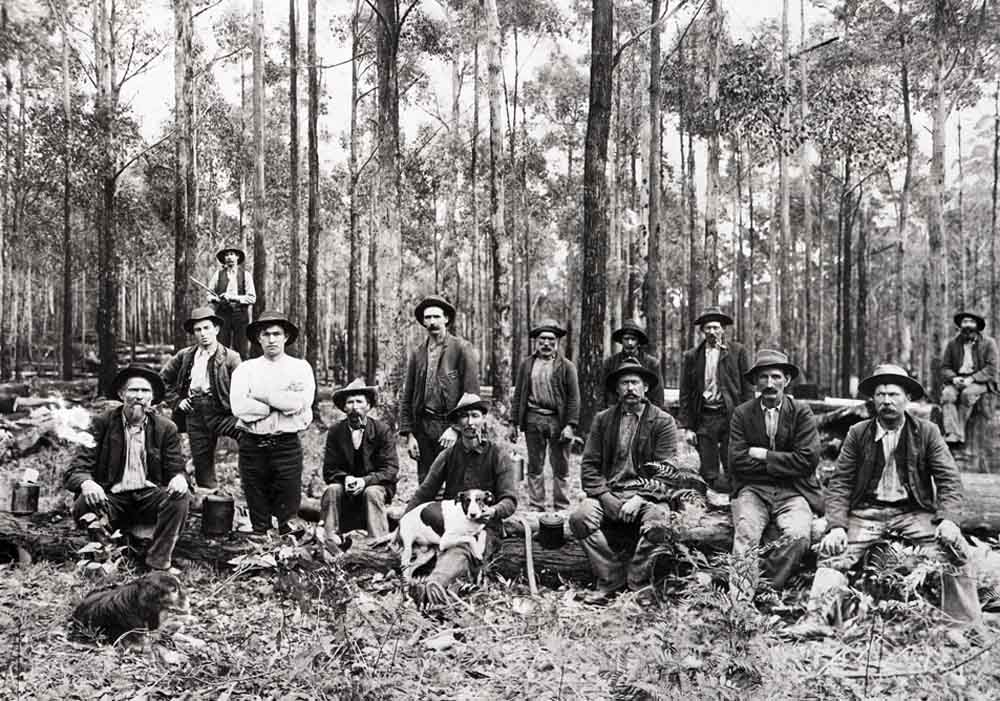