This brief paper outlines the extent of Australia’s forest cover and the changes since European settlement in the late 18th century.

The Definition of Australian Forest

The formal definition of forest in widespread use in Australia since 1992 is:

“An area, incorporating all living and non-living components, that is dominated by trees having usually a single stem and a mature or potentially mature stand height exceeding 2 metres and with existing or potential crown cover of overstorey strata about equal to or greater than 20 per cent. This includes Australia’s diverse native forests and plantations, regardless of age. It is also sufficiently broad to encompass areas of trees that are sometimes described as woodlands.” (National Forest Inventory)

This differs from the definition of forest used by the UN Food and Agriculture Organisation for the Global Forest Resource Assessment (minimum crown cover of 10% and minimum height at maturity of 5m). It is important to distinguish between tree cover and forest cover. Tree cover is based on the presence of trees at the time of the assessment, while forest cover may include areas that are temporarily unstocked following harvesting or wildfire.

One of the first and most comprehensive estimates of the total area of forests prior to European settlement in Australia was published by John Carnahan in 1990. Carnahan worked back from contemporary satellite images and regional maps of vegetation, and used historic records in all forms, notes and environmental surveys to generate a map with a smallest distinguishable mapping unit of about 30,000 hectares. Generalisations and compromises were carefully documented.

Carnahan estimated that at European settlement in 1788 there were about 349 million hectares of forest in Australia, using today’s definition, or 45% of the total land area. This study identified 25 natural vegetation classes, of which 10 were forest and three classes of non-native vegetation (urban, horticulture and intensive cropping, and no vegetation). The information was presented in both atlas and map form (at a scale of 1:5 million).

The first state-wide map of the forest cover of Victoria was printed in 1869, about 30 years after the arrival of European settlers, at an approximate scale of 1:1 million. This compilation was directed by Arthur Everett. Known as the Everett Map it comprised 12 classes of forest covering 19.98 million hectares, about 88% of Victoria’s total area of 22.78 million hectares.

The Everett map was put together from detailed notes collected by early surveyors under the direction of then Surveyor General R. Brough-Smyth and reviewed, by Victoria’s first Government Botanist, Baron Ferdinand von Mueller. It was redrawn by Professor Joe Powell of Monash University in 1967, and subsequently re-interpreted by Peter Woodgate and Peter Black, working with the benefit of contemporary Landsat imagery and other data, and entered into a Geographic Information System for the calculation of the area statements.

The human causes of forest cover change are well documented and include mining activities, clearing for pasture, grazing, and cropping, sometimes with associated wood production, and development of urban settlements. Natural factors such as wildfire, drought and disease can also drive change in forest cover.

Carnahan assessed the evolution and causes of change from the pre-European condition and mapped the extent of forest cover in 1990. His estimate put the national extent of forest in 1990 at 224 million hectares, a loss of 32%.

More recent estimates by the National Forest Inventory in 2013 used ‘multiple lines of evidence’ to compile their estimate of 125 million hectares. This included assessment of tree cover for the National Carbon Accounting System and more detailed mapping by state and territory agencies. The estimated area in 1990 was 128.5 million hectares, 57 percent of the Carnahan estimate. Current estimates suggest the forest cover declined by about 6 million hectares between 1990 and 2013.

Caution is needed when drawing inferences about change based on earlier estimates. Compared to most other countries with significant forest cover, Australia has a large area of low-density woodland forests and it is difficult to discriminate precise boundaries of forest areas at a threshold of 20% crown cover. Contemporary estimates of forest cover are increasingly based on satellite images and analysis algorithms that can determine tree cover at a scale of a few square metres. Mapping undertaken using remote sensing in the 1990’s or earlier was limited to coarser resolutions of tens of hectares, or sometimes even larger units of area. The National Forest Inventory has not directly compared Carnahan’s pre-European estimate of forest cover with those of the present day, but we can conclude that the area of forest has declined substantially from pre-1788, possibly by 40%, and by about 5% since 1990.
While rates of forest clearing have declined significantly as a result of State legislation and national incentives, losses due to urban expansion are continuing. Emerging threats to forest cover include repeated wildfires, extended droughts and associated disease or insect defoliation under a rapidly changing climate.

Victoria’s 2013 State of the Forests Report estimates the total area of forest at 8,198,000 hectares, some 36% of the State, including 434,000 hectares of industrial hardwood and softwood plantations. Broadly comparing the 1869 Everett-derived forest cover in Victoria with the 2013 State of the Forests estimate, and recognising the clear differences and limitations in the means of creation of the maps, shows that forest cover has declined in the state by about 11.8 million hectares, or some 51% of the total area.

A number of factors contributed to the reduction in forest including; agricultural development and especially the land acts of the 1860’s that encouraged clearing, mining during the latter half of the 19th century, burning and dieback.

Table 1 provides a summary of the estimates of cover and change from pre-European to recent times for both Australia and Victoria.

Table 1 Estimates of forest cover from Pre-European to the present day, Australia and Victoria 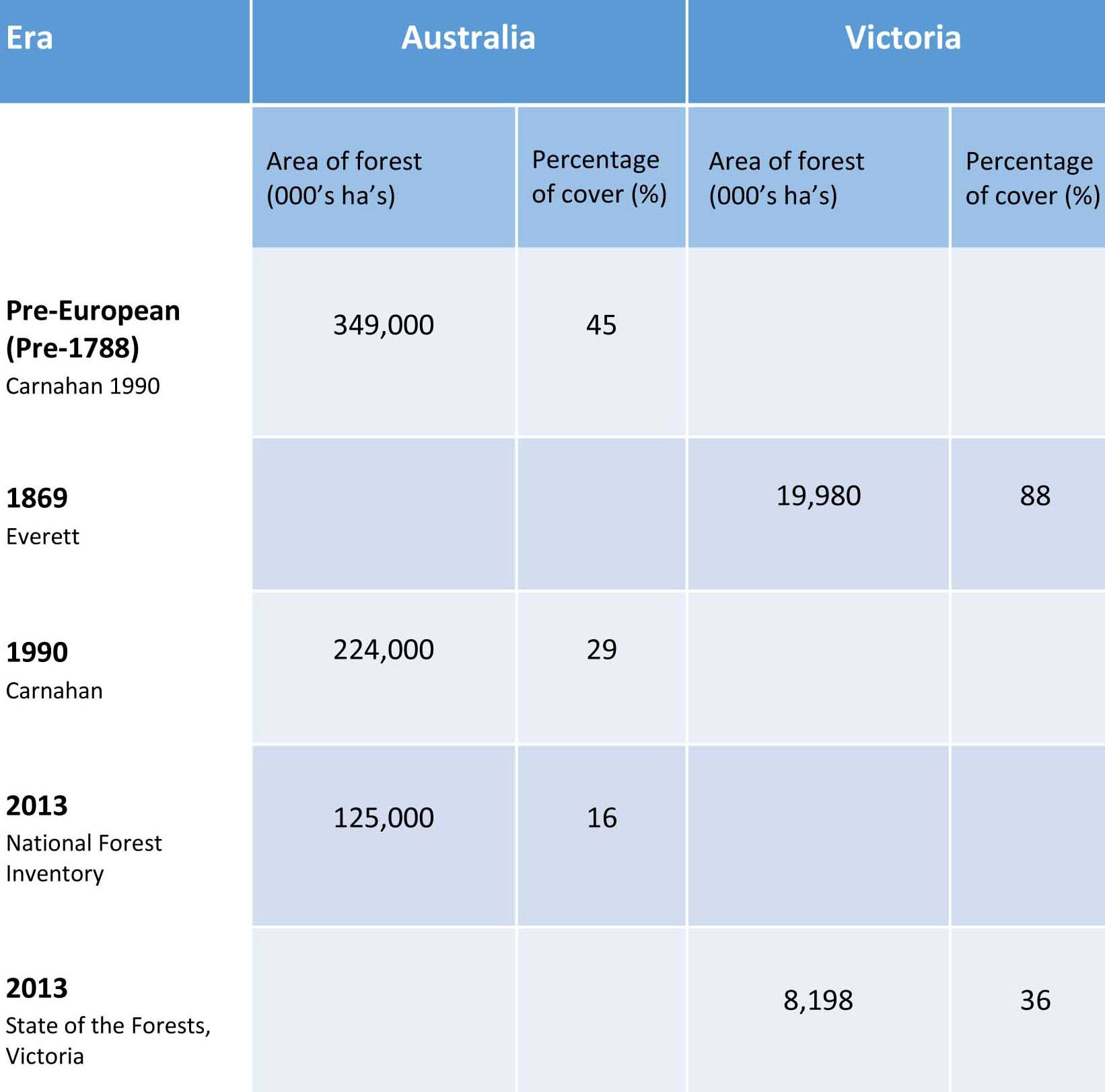 A wealth of information on Australia’s forest cover has been prepared over the years and the resources below provide a good starting point for those who wish to know more.