This article, and the art that accompanies it, was provided by Arnis Heislers and Ian Weir. The date the article was written is unknown but it was probably in the 1990s.

It is also worth noting the extract below from Royal Commission Report No. 3 (1899)

"The county of Tangil, in Gippsland, which once contained extensive tracts of the finest forest redgum, now affords only small supplies, no care having been taken to retain the Crown rights to the best timber lands. Coongulmerang, the last remaining reserve there, which contained about 13,600 acres of valuable young timber of this kind, was withdrawn from the forest area in the year 1894, and surrendered to the axe of the selector."

There was a woodland of large red gums on the plains between Traralgon, Briagolong and Sale, in the Latrobe Valley, and they were felled, cut into small blocks, and exported in sailing ships to London for use as paving blocks for the streets. It is those red gum blocks from Gippsland (and jarrah from WA) that produced the sound of horses' hooves in Sherlock Holmes films.

That is the legend of the Gippsland woodland of forest red gums, Eucalyptus tereticornis. It was more open and grassy than a forest, but it certainly covered a large area - 1200 square kilometres. Its boundary extended from Morwell to Heyfield, to the Macalister Valley, to Boisdale, the Mitchell and Tambo Valleys, and to the coast near Sale and Yarram. It was a good source of heavy timbers for bridges and wharves, and suddenly, at about 1867, there was a great surge of interest in it, not only as a source of timber, but as potential farmland which could meet an urgent demand for food.

There was a gold mine at Walhalla, about 30 kilometres away, and it was some mine. It began in earnest in 1863, tunnelling into the side of the mountain, along Cohen's Reef, the largest single reef in Victoria, producing prodigious yields of gold, (55 tonnes of it in 40 years, worth 800 million present-day dollars all told). All the miners and the workers transporting materials and supplies to Walhalla needed food. So the red gum woodland, which looked to be growing on fertile soils, like Gentlemen's estates of parkland in England, was released for development as farmland.

The settlers struck trouble from the start. If they ploughed the heavy alluvial soils on the grassy lower flats, they put them out of use for many years, and other soils also that looked promising proved to be unsuitable for farming. The settlers had to make a living by working at the mine or in support of it at the railhead at Toongabbie, and that interfered with their obligations as settlers.

Little of the woodland was suitable for cultivation at all. In the end it was grazing country, but only when modem fertilizers became available. There were failed farms, general economic depressions, and drought. One way to survive was to cut the red gum timber on your own selection into paving blocks. That was why and how the millions of paving blocks were produced.

There still are some patches of forest red gum in Gippsland, about 2000 acres altogether, growing in eight parks and reserves. They are now called Forest Red Gum Grassy Woodland, which is listed as a threatened community of plants and animals; because they are deteriorating and they need protection.

Other forest red gums are growing well in Gippsland, mainly around the edges of the original woodland. There are some beauties on the flat gravel terrace of the golf course at Newry, and on a big cattle stud farm nearby, a few at Toongabbie on the southern edge of the woodland, and many others where they are well supplied with water from irrigation channels and pastures. Stands of saplings line many of the roads, and thickets of shoots two feet tall survive in corners of graziers' paddocks here and there, even where the cattle graze. It seems to be a great survivor.

There are two different red gum trees growing side by side near Lake Glenmaggie. One is a well-grown forest red gum with a round crown, growing with a group of saplings of the same species. We would call them second growth. They have a few large very old stumps among them. The other is a river red gum (Eucalyptus camaldulensis), of quite recent origin, which has caught up to the other's height and is now ten feet taller and racing away. It is as thin and straight as a rake, with short skinny branchlets from top to bottom. This is very unusual for a river red gum. In most of its thousands of the habitats all over Australia it grows as short trees with stout twisted trunks and heavy branches. 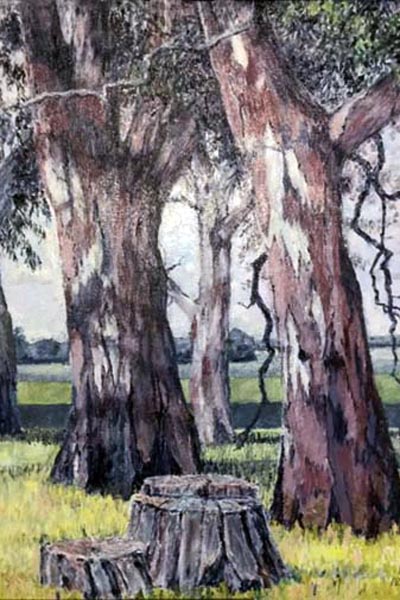 Red Gums at Glenmaggie
A painting by Murray Paine

This one at Glenmaggie is a genuine river red gum, a sapling from the Barmah Forest beside the Murray River. It was planted at Glenmaggie as a tubed seedling about 1965, when Barrie Dexter was studying the trees in their habitat of the Barmah forest. Barrie raised many seedlings for his research, and this one had served its purpose and was about to be discarded when he gave it to me. It is very likely that Barrie would have selected seed for part of his research from the tallest and straightest trees he could find.

Many of the trees in the Barmah forest are tall and pretty straight. Perhaps they had to grow tall to survive there. They are on a flood plain of the Murray River that began to develop about 25,000 years ago when an earth movement called the Cadell Fault blocked the River and caused a lake to form.

So the red gum forest there had that time, at least 250 generations, to evolve trees with a tall slender growth habit, possibly by being the tallest in dense thickets of seedlings on the mud at the edge of receding floodwaters, and surviving their first few floods by keeping some of their leaves above the water. That is fanciful stuff, I know; but Barrie's'seedling did bring that characteristic with it from Barmah to Glenmaggie.

That one river red gum is alone there beside hundreds of forest red gums, many of them small leafy shoots on lignotubers, others in stands of saplings, and others as widely scattered veterans, some scarred by their battles with fire and fungi, others in well-watered paddocks looking like the river red gums in the farm paddocks of the Western District but taller, and other tall giants apparently in the prime of their lives. There are perfect nesting hollows in them, and no doubt some of them provide sleeping quarters for possums and bats.

The forest red gums certainly will survive and slowly grow big and tough; and the river red gum is close enough to the edge of the lake for its roots to reach the water every year, so it will survive too. They are all in this for the long term. Maybe that is what foresters like about trees.

This article based on Murray's recollections of his life in forestry, and the gallery below. (Click on a thumbnail to open the photo and slideshow.)