The title of this article is unashamedly pinched from "Of Sawyers and Sawmills", as per the quote below.

"Portland at this time was entering upon a period of transition. "The good old days" were passing, and there were lean times ahead, and things might have been worse but for the relief afforded by the wattle bark industry, which attained such proportions that Portland was known far and wide as "Barkopolis".

In his scathing, and therefore buried by the Government, Report of 1887, Vincent comments on the topic of wattle bark in a few places.

"68. The present licensed system works badly, and the proper way to manage forests which are worked for wattle bark is to manage them under a working plan. The area fixed for stripping in each year should be sold by auction. Stripping should only be allowed from 1st of September to 31st of January. The menmight be allowed to cut what they like, and we should then, no doubt, get a greater uniformity of age, which has many advantages for purposes of control, &c. The revenue, by working the sales in this way, will probably be much greater than that obtained by issuing licences."

Given the significant timber resources available from natural forests, Vincent was sceptical of the need for plantation development at this stage. However, he does note that "after a few years" wattle plantations may be a profitable enterprise.

"79. There is little doubt that these may be made to pay extremely well, but the remarks that I have just made apply equally to the wattle. There are very large areas more or less covered with (?) trees. Both time and money can for the present be far better spent in preserving these, and in making them secure against the selectors and against theft, than in making plantations. After a few years wattle plantations might be commenced. In selecting the reserves, areas suitable for the growth of the tree, and close to the market, might be specially taken up with that view."

He then does go on to indicate that some small plantings of wattle have already occurred.

"Small plantations have been made at Majorca, where 500 acres have been planted with wattles, pines, and blue gums; at Havelock 300 acres, and at the You Yangs 1,080 acres are enclosed and partly planted with the trees just mentioned. In each case there has been no great success, except with the wattles and blue gums."

"The Railway Reserves bordering the line between Melbourne and Colac, Geelong and Queenscliff, Jung Jung and Horsham, have been partly sown with wattles. There is no record of the cost. The growth is generally good, and the work ought to pay its way. It is, of course, an advantage to have land already cleared and fenced, but against this there are many disadvantages which suggest themselves, such as danger from fire. Unless the Forest Department has secured the land for a term of years – which does not appear to be the case – it is probable that the public will insist on the trees being cleared when it finds that they cut off the breeze from trains passing along the line."


"In the period January 1871 to July 1884 19,426 tons of wattle bark were exported overseas from Portland.The bark was used in the tanning of hides. The bark was chopped into lengths from three to six inch long with a chopping block and a small axe. Choppers were paid approximately 10 to 12 shillings per week. This was most likely Mr David Kays mill (photo below) as he built two large sheds in Percy Street where grinding machines were introduced. Bark was transported by either bullock or horse teams from the surrounding area, the money earned by the settlers helped to pay for the early selections." (Unknown source)

"Attempts were made to cultivate the wattle, with some degree of success. A Government financed plantation was planted in the Kentbruck area but was burnt out by a bushfire before it was harvested. Another was planted at Lower Cape Bridgewater, but the fate of this plantation is unknown. Some farmers fostered the growth of self sewn seedlings in areas previously stripped, by keeping stock off paddocks for a year or two till the young trees were established. This supplied them with a cash crop every five or six years at little cost. However these plantations fell well short of replacing the virgin stocks which had been over exploited for 50 years."

"Due to shortage of supply and for other reasons, Portland's last bark mill ceased operations in 1935. While small amounts of bark were still stripped in the area up till the 1950's, it was all sent to Melbourne for processing."

Wattle bark was being shipped from Bairnsdale in the 1860s.

"The industry developed very rapidly; at one stage in 1868, there were 2000 tonnes of bark ready for shipment from Bairnsdale. The strong demand for bark coincided with the opening up for selection of large areas of the best wattle-growing country. This was a boon to the selectors, for bark stripping not only helped them to clear their land but also provided them with much needed cash. When they had stripped the wattle on their own land they moved on to nearby Crown Land, where they were joined by ex-miners and other itinerant workers. Bark stripping paid well but it was very arduous work. The establishment of tanneries at Sale, Stratford and Bairnsdale added to the demand. By 1875 stripping had even extended to the Orbost area where Charlie Peterson, who had started shipping from the Snowy River, brought in a gang of 40 bark strippers."

Early reports indicate planting of wattle was still occurring in the early 1900s.

"Large wattle and sugar gum plantations have been formed in the Portland district, and smaller ones at Mount Beckwith, Eddington and Cave Hill." (Extract from Annual Report SFD 1905)

"The plantations at You Yangs, near Lara, cover some 1,300 acres, and consist chiefly of blue gum, sugar gum, pine of several species, and tan wattles." (Annual Report SFD 1907-08)

"A commencement has this season been made at Dimboola, where 2,500 acres are enclosed, sowing and planting of sugar gum, bluegum (the latter for fuel), and various other hardwoods being in progress. (Annual Report SFD 1909-10)

"Black featherleaf wattle was sown on 393 acres at the Grampians, at Lake Lonsdale (near Stawell), and at Mount Beckworth (near Clunes)." (Annual Report SFD 1917-18) 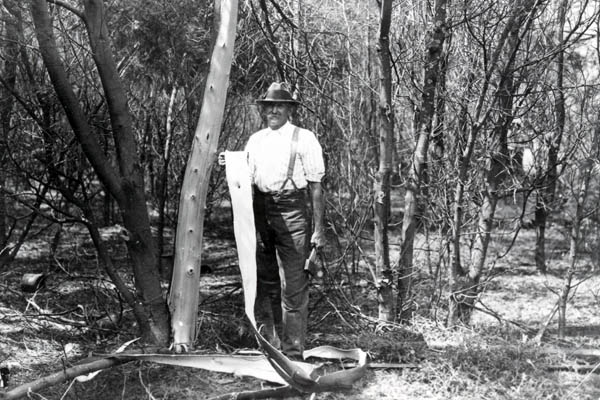 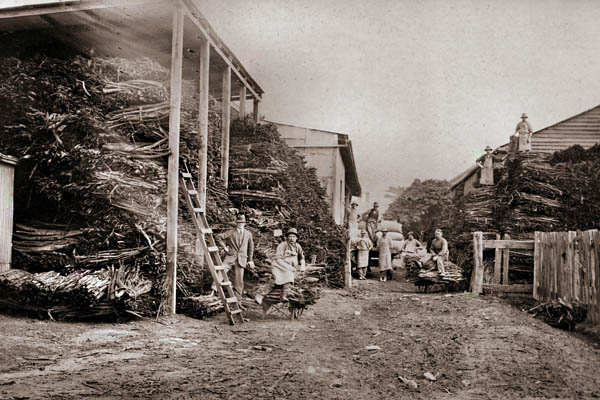 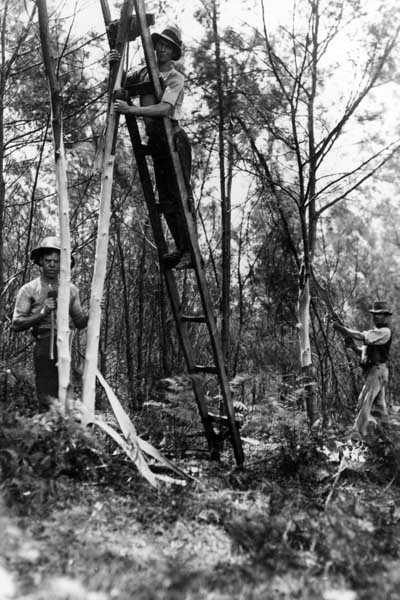