Reflecting on my association with the Errinundra Plateau, the beginning was stimulating and challenging and the end understandable though deflating.

In the mid 1960's the wet sclerophyll forests of the Plateau were the focus of timber industry expansion into East Gippsland. Supplies of Alpine Ash (Eucalyptus delegatensis) and other high elevation species in Central Victoria,and particularly those available to the sawmillers at Heyfield, were waning.The industry, with some urgency, had visions of an untapped resource of select quality timber available from the stands of Shining Gum (E nitens), cut-tail (E fastigata) and occasional ash species.

In 1966, the allocation of the right to extract sawlogs from the Plateau was granted to the Heyfield/Orbost Sawmilling Company, headed at the time by Bert Head, a VSF graduate from 1933, and a man of strong intent and considerable ability as a stump-orator.

The Company had undertaken pilot mill studies, mainly from Shining Gum stands closer to Bendoc, where board timber was being cut by local sawmillers to supply the high-value housing market in Canberra. A new sawmill designed to cut such timber was built at Brodribb, just east of Orbost, and the first logs from the Plateau were milled in the summer of 1967/1968.

The opening of the new frontier for sawlog production had both excited and challenged the staff and workforce of the Orbost Forest District. Matters which were considered and acted upon were access roads, compartment planning, coupe design, the location of logging and personnel camps, trees for seed supply, gravel pits, and weather and checking stations.

Although a steady supply of sawlogs was maintained to the mill in the early years of operation, many teething problems were encountered. Access roading was centred on the Company building Greens Road, flanking the eastern slopes of Mt Ellery, and the FCV upgrading the Gunmark Road, south of Bendoc. The granitic sands and boulders along Greens Road, associated with drainage issues, were unforgiving.The mean average rainfall on the Plateau turned out to be around 1750mI compared with Orbost's 750ml and Bendoc's 890ml. This had a severe impact on the length of the logging season, the intensity of regeneration burns, and the recently constructed road network's capacity to carry log trucks. Coupe size had been limited to 30 acres (about 12ha), with cull payments to fallers to bring all but dangerous trees to the ground. Early regeneration burns, decreed by the FCV to be undertaken outside the declared fire season, were very patchy. Aerial seeding, with Ben Buckley on the wing, predominantly spread Alpine Ash, as the Shining Gum flowering periodicity (approx. 8-9 years) severely affected seed supply. ln the second season of logging a small tree nursery was established in Orbost to raise shining gum tubed stock for planting out on the Plateau. Subsequent regeneration and mortality surveys proved that both approaches met industry standards.

In the sawmill, the prevalence of Ambrosia beetle, and associated fungal staining of the sawn boards, degraded the product in the market. This factor, with roading considerations, saw royalty rates reduced by the FCV in the early 1970's.

While a number of foresters were involved in the action on the Plateau, the one constant was Frank Morris, a product of East Trentham and a graduate of the 1966 Foremen's School at Broadford. Frank saw it all from the breakout of the logging roads to the final regeneration burn. He moved quickly around the bush and was to be reckoned with in any hurly-burly with contractors or fallers at landings. He had pride in his work, and although aware of the likely outcome of Land Conservation Council investigations, he found it hard to cope with the blockades and slovenly presence of protesters on his patch.Frank retired to a farm at Simpsons Creek, then ventured to Lakes Entrance. A memorial cairn acknowledging Frank, and made of local pink granite, stands beside the Errinundra Road and opposite one of the early logging coupes. It is a lasting reminder of his work ethic from his many forestry admirers. 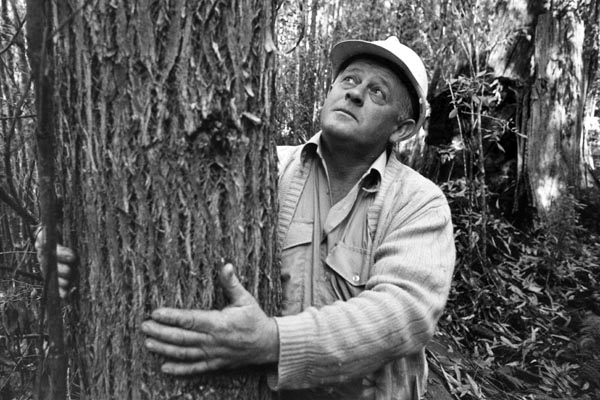 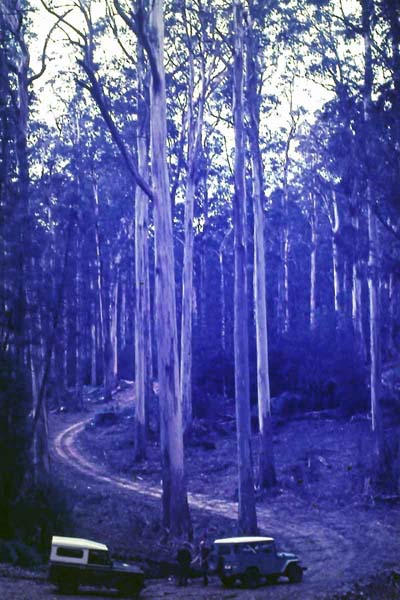 Few visitors to the Errinundra National Park could now differentiate between logged and unlogged sites. The coupes of the late 1960's and early 1970's support Alpine Ash and Shining Gum regrowth, exceeding 45-50 metres in height, over a flourishing understory of wattle, sassafras,waratah and mountain pepper, to name just a few species.

So why was the end deflating? The forests of the Errinundra Plateau have passed from active management to passive protection.