As a young forester working at Rennick (headquarters of the FCV's Lower Glenelg Forest District) in the mid-1960s, it was brought to my attention that the Rennick plantations were originally established on a strip of land which had been known as the "Disputed Territory".

This was told to me by the-then Superintendent of Plantations (KJ Simpfendorfer) as well as the District Forester (GG Shepherd). A recent conversation with a former District Forester who was in charge of the adjacent Heywood Forest District in the early 1960s confirmed this belief.

The first Pinus radiata plantings in the Lower Glenelg Forest District were in the late 1940s, on a strip of land between the Heywood - Mt Gambier rail line and south almost to the Glenelg River, and immediately adjacent to the border. Coincidentally this area was part of the "Disputed Territory". 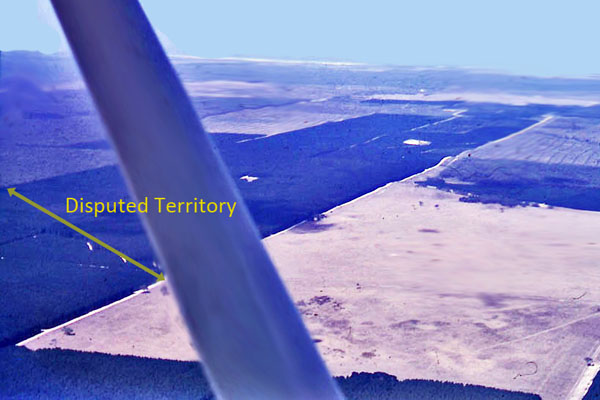 An information board at a roadside stop beside the Western Highway/Dukes Highway at the Victoria-South Australia border seen recently reminded me of the saga of the Disputed Territory.

What was this "Disputed Territory"?

For many years some residents of this area did not know if they lived in Victoria or South Australia.

When the South Australia Colonization Act was passed by the British Parliament in 1834, the boundaries of the proposed Colony were defined in terms of the coast and, presumably for want of any other landmarks, by latitude and longitude. The longitude of the eastern boundary was set at 141oE. Charles Tyers surveyed and marked this position on the coast (near Nelson) in 1839.

Between 1846 and 1850, surveyors Henry Wade and Edward White began from this point and proceeded to mark the border on the ground with blazed trees, mounds of earth and piles of stone. They stopped at a point (called Wade’s Termination Point) about two kilometres north of what is now a parking bay on the highway near Bordertown. South Australia (in 1847) and New South Wales (in 1849) proclaimed their 200 kilometres of surveyed line from the coast to this point as the official border.

White later continued the survey from Wade’s Termination Point. After several arduous and eventful expeditions he completed the marking of the border to the Murray River in December 1850.

In 1868, in preparation for the marking of the border north of the Murray River between South Australia and New South Wales, better equipment and surveying methods found that, when Wade and White began their survey, the 141oE meridian was inadvertently set some two minutes of longitude (about three kilometres) too far west. The South Australian Government wanted the border shifted to the true position of 141oE.

Meanwhile, in 1851, the Port Phillip District of the colony of New South Wales was separated from NSW to become the colony of Victoria. Victoria’s government resisted giving up this valuable strip of border land which became known as the "Disputed Territory". At the Murray River, this strip is about 3.5km wide.

Legal battles continued for 45 years until the Australian High Court, in 1911, decided that the Wade/White line was the legal boundary. The dispute continued until 1914 when the Privy Council ruled in favour of maintaining the status quo.

Was it coincidental that the plantings were established on this strip of land, or was it the Victorian Government wanting to ensure possession is nine-tenths of the law?

The total area of this plantation block expanded dramatically during the 1960s and 1970s era of plantation area expansion, known as the PX program.