Aeroplane patrols were utilized for the first time in Victoria as part of the fire-detection scheme in 1929-30. This involved co-operation between the Forests Commission, the Australian Air Board at Laverton, the Commonwealth Meteorological Bureau and the Commonwealth Postal Department. The Meteorological Bureau advised the Commission and the Air Board of approaching bad fire days, and all forest officers in the selected area are informed accordingly. The Air Board arranged for Westland Wapiti planes to be sent out to patrol the area and information regarding all fires located was wirelessed to the Board, which advised the Commission which, in turn, communicated the details by telephone to the forest officer concerned. By special arrangement with the Postal Department such telephone calls received preference, so that it was only a matter of a few minutes between when a fire was located to the time the forest officer received notification of its existence.

Although this arrangement was working successfully, it became obvious that time could be saved by direct communication between the aerial patrols and the forest officers concerned so, in 1932-33, tests were carried out using single-way communication - with the forest officers picking up messages on ordinary wireless receiving sets. Two-way communication would have had distinct advantages but that would involve the construction of special transmitting sets. Experiments along those lines were established but lack of funds delayed progress.

The 1939 fires and the subsequent Royal Commission gave impetus to the development of radio communication and Geoff Weste (VSF student between 1936-38 and who was incapacitated while fire-fighting in 1939) was attached to the communications section of the Commission's Fire Protection Branch, and was detailed to “get it going”.

The RC16 transceiver had been designed and built by the Radio Corporation just before the outbreak of WW2.  The Forests Commission in 1939 adopted a version that had been modified for the Army and the RAAF – designated RC16B.  It weighed about 9Kg and used fragile valves that failed if the unit was dropped or bumped.  As a portable, it was powered by a dry-cell battery weighing 1.6Kg; a much heavier battery was employed in office situations.

In 1940 two SPF-type radiophones (Sets-Portable-Forestry) were imported from the United States of America. These sets were used primarily by the US Army and Forest Service rangers and firefighters for voice communication between units in the field and base stations over distances of perhaps 16km to 32km. The Commission tested these under varying conditions and regular communication was maintained between Matlock and Powelltown, an air distance of about 45km.

On the basis of specifications prepared by Mr. R. Mackay, of the Melbourne Technical College, the Commission called for tenders from manufacturers within the Commonwealth for a set similar to the SPF and, after exhaustive tests of several submitted, orders for 20 were eventually placed.

The use of radio was highlighted during extensive bushfires in the Orbost District in February 1952 and recorded in the film "Calling VL3AA".

In mid-1941, Geoff Weste set up aerials in Head Office to test short-wave radio sets with Newport. Geoff was of a view that the Germans were using frequency-modulated radio as a 'secret weapon'.

The Commission's Melbourne short-wave station - VL3AA at 'Head Office' - was placed in full operation on 200 watts in October, 1945. The VL being the prefix for Government bodies; the 3 signifying Victoria and the AA being the first such network in Victoria. [Reportedly, many other government networks were jealous of the attribution of that call-sign to the Forests Commission.] Two-way communication was maintained with 13 major country centres during that summer. Weather bulletins and fire-danger warnings were transmitted and reports from fire-spotting aircraft were signalled to Forest District headquarters immediately on receipt of messages from the R.A.A.F. headquarters at Laverton. And a new R.A.A.F. operational order enabled aircraft to directly contact the Commission's ground stations to report outbreaks. 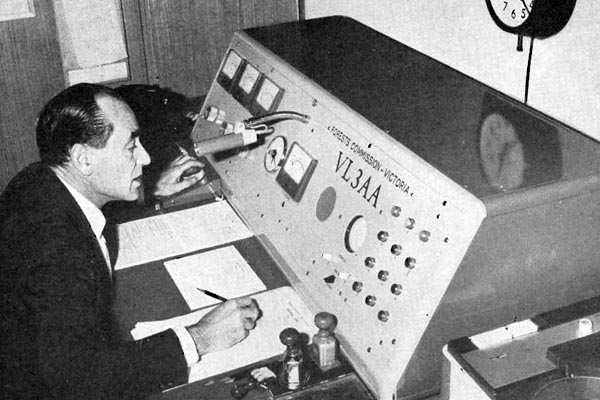 In 1970/71, following tests of VHF radio, the Commission purchased 18 VHF transmitter-receiver units and were developing VHF/FM radio systems to replace the HF system.  Four frequencies were allotted to the Commission plus a fifth for fire operations.  It also purchased 45 Single-Side-Band radios operating on 4.8MHz and equipped each District Office with a base radio that could operate on Country Fire Authority VHF channels.  Further, the Commission built base radio installations for the National Parks Service and the Fisheries and Wildlife Division networks.  In all the FCV’s radio communication staff installed or repaired 1964 radio units in that year, of which 1476 were the Commission’s.  Twenty-six receiving sites were operational in remote, usually mountain-top, sites but, due to the increasing incidence of theft and vandalism, steel security boxes had to be purchased to house the radio equipment in vulnerable locations.

The Statewide network continued to expand based on the Forest Districts, the call-signs for which in 1974 are shown on this map.

A good technical description of some of the early radios used by the Commission can be found in an article by Rodney Champness in Silicon Chip, an Australian-based electronics magazine.  The FCRPA appreciates the opportunity to reproduce that article.

Read the story of Rex Philpot, an innovator in the mid-1960s in developing relatively rugged portable radios for the Commission.

And Charlie Reisinger, whose hands-on knowledge of the Commission's radios started in 1964, has provided some insight into the usefulness of the early portable and mobile radios.