A ‘Walk into History’

In the 1860s, as railways started to penetrate the rural countryside, the relatively large areas of Victoria’s then both privately, and publicly-owned forests began to be seen, increasingly, as an economic resource. The problem was how to get the timber to the new railways and, in a few cases, to jetties.

In many parts of the State, and particularly in the mountains, where most of the highly productive forests were located, roads were for lengthy periods impassable, and solving that problem was prohibitively expensive.

Crawler-tractors were yet to be invented, as were motorised vehicles.

An early solution, in a number of areas, was the construction of timber tramways. Initially using closely-packed sleepers, wooden rails, and horses for motive-power, the tramlines evolved to, in time, see the use of steel rails and steam locomotives.

In the mountains, more often than not, the most sensible route was to follow the gentle grades of the creeks, and to transport the harvested logs downhill. As tramway construction techniques improved, so too did the weight of timber that could be transported.

The combination of technological developments, improved roads, and bushfires were to see the tramlines fall over time into disuse. And particularly as a result of fire, and subsequent vigorous forest regrowth to largely, in many places, disappear from view. This process particularly gathered pace following the 1939 bushfires, and the Second World War.

In the early 1980s the FCV’s Central Field Division contained six Forest Districts, stretching from Broadford in the west, to Lake Eildon in the north, and to Western Port Bay in the south-east.

The Upper Yarra Forest District was administered from the small hamlet of Powelltown, located in the valley of the Little Yarra River. The District Forester was Andy Banks, and his senior assistant forester was Geoff Evans. A valued member of the permanent works-crew was Fred Newcombe. Fred, as a teenager, had worked as a Blacksmith’s Offsider at the new Federal Sawmill, which was located deep in the forest, north-east of Starlings Gap. One of the District’s most experienced Forest Overseers was Les Lasham.

Geoff Evans had grown-up at Stawell, in western Victoria. His father had worked with the Victorian Railways and Geoff had developed a deep interest in, and knowledge of railways. Prior to being posted to the Upper Yarra District, Geoff had been based at Forrest, in the Otway’s. There, a senior Overseer, Jim Spiers, had brought to Geoff’s attention the network of timber tramlines that had operated in the Otway Ranges in earlier years. During the same period, the historian, Norman Houghton, had also published one of his earliest books about the early Otway-based timber industry.

Following Geoff’s arrival at Powelltown in 1978, his early guide and mentor was Les Lasham. As they travelled around the District’s forests Geoff’s questions, and Les’s knowledge were, in time, to see a tramway related ‘vision’ start to emerge.

For a decade or two at least, prior to the early 1980s, a short section of tramline, Reid’s, that ran north for about two kilometres from the Powelltown/Noojee Road, commencing about 500 metres east of Powelltown, had been maintained by a number of Scout Groups. Bushwalking groups are also understood to have done occasional clearing of short sections of the network in the 1950s and 1960s.

Bits of tramlines remained visible elsewhere in the local bush – a decaying trestle bridge here, a section that had become part of the forest road network there. And machinery relics, old boilers, winches and the like were also encountered in the forest. But in the wake of widespread bushfires in the area in 1939, and the virulent regenerating vegetation, the tramway/bush sawmill era was rapidly being lost to history.

Geoff and Les started to involve Fred Newcombe in their deliberations. Fred was now in his 60’s, and was working as the District’s carpenter. Among other things they set out to explore ways to preserve at least a section of the tramway network for the benefit of future generations.

After much deliberation, calls on Fred’s teenage recollections, and a number of exploratory bush visits, the latter of which often involved crawling around the thick bush at possible locations on hands and knees, looking for tramline ‘hints’, and then commencing revelatory clearing.

In time a plan began to emerge. It appeared that is should be possible to link Big Pat’s Creek, east of Warburton, with Powelltown, via Starlings Gap; using a series of historic tramlines and in so doing creating a 43 km. walking track, along mainly gentle grades. And a close-to-Melbourne track with great scope to portray an earlier time and way of living in the forest’s recent history.

And so, over the next several months the District budget, and associated works program were gently ‘tweaked’, and the task of re-opening the fast-disappearing tramlines proceeded.

Fortuitously, additional progress was possible over the summer months as, in those times the FCV Districts received government funding to increase their workforces in advance of each year’s bushfire season. And milder summers saw additional crew personnel available for other tasks. 1

As the track work continued, research into the history of the lines being re-opened also got underway. All this work occurring with the tacit support of the Divisional Forester, Ken Harrop.

Among the vegetation that had re-established itself along the tramways since the 1939 bushfires were hundreds of tree-ferns. These, after careful removal, were transported to appreciative public facilities, such as Melbourne’s Botanic Gardens, for replanting. 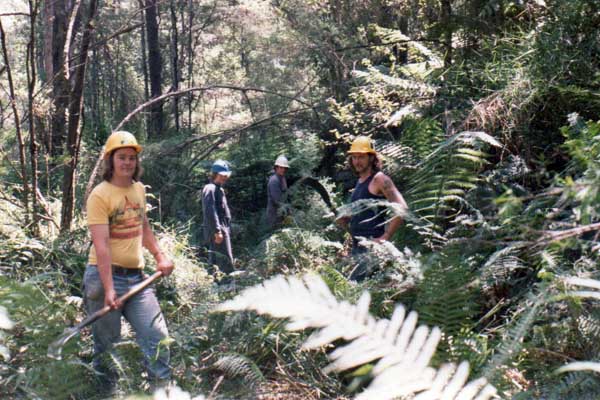 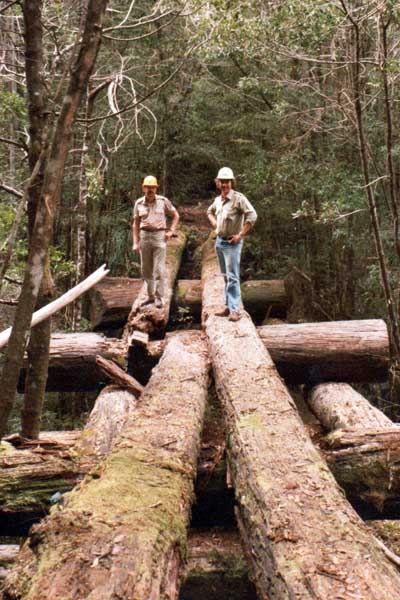 With the track work eventually completed, and initial interpretative signage in place, the newly named ‘Walk into History’, a credit to all involved in the Powelltown District, was open for business.

The best family walk in ...

At the time Dr Sandra Bardwell, a well-known bushwalker and author, had a very popular weekend column in Melbourne’s Age newspaper. Stuart Calder, then the FCV ‘Recreation Officer’ and Sandra knew each other well, and at Stuart’s suggestion, Sandra and her husband Hal agreed to, over a weekend, walk the newly created trail. Accompanied by the authors, the four enjoyed near perfect weather. Sandra and Hal being so equipped, camped overnight in the forest, while the authors took the lesser option.

During the walk, and among other things, Sandra suggested the new ‘Walk into History’ was, for several reasons, arguably, "... the best family walk in Australia ..."

Subsequently, The Age, on two successive Saturdays, ran two-page illustrated descriptions of the new walk, the article describing it as "... the best family walk in Victoria ..."

The Upper Yarra tramline project was not yet done. Following an approach by the Army’s 91st Forestry Squadron, which wanted to conduct a timber sawmilling exercise in the Yarra forest, Geoff found himself in discussion with two brothers, Ad and Fred Kobiolke. The two had operated a local sawmill at Gilderoy for many years. A story emerged about an abandoned tram, comprising ten sets of ‘bogies’, that had been left on a branch tramline near the High Lead on Doweys Spur Rd, following the 1939 bushfires.

On this occasion the remarkable memories of the sawmilling brothers were pressed into service. Considerably more detective work followed, and the bogies were ultimately located, all but hidden by the regenerating forest.

Photographs were taken, and then two ‘bogies’ were carefully disassembled, and subsequently recrafted at the District workshop by carpenter Fred Newcombe - the bogies being chosen to display two variations of the rudimentary braking-systems in use on the tramways at the time.

Meanwhile, the 91st Forestry Squadron had cut the timber to be used in the display.

The existing wayside stop opposite the FCV Powelltown office, on the Noojee Road, was used and, to this day, a rebuilt loaded ‘carriage’ can be viewed there. (Figs. 1a & 1b)


By the mid/late-1980s, the FCV had been subsumed into the newly-created Department of Conservation, Forest and Lands. Karl Rumba, the FCV’s last Healesville-based Divisional Recreation Officer had become CFL’s Project Officer for a mooted, visionary plan to convert the former Lilydale to Warburton broad-gauge railway alignment to what would ultimately become Australia’s first major "rail-trail" (a walking, cycling and horse-riding track).

Such a, then, visionary concept was not without it challenges. The Warburton railway line had been closed in July 1965 and with the dismantling of the track in the 1970s the land had remained vacant. On at least two subsequent occasions the State government investigated selling off the land, but withdrew these proposals at least in part due to community opposition.

Protracted negotiations were required with neighbouring farmers who had previously occupied the reserve and it was not until 1996, and the efforts of among others, local volunteers, particularly the Friends of the Lilydale to Warburton Rail Trail, the local Council, and State and Federal governments, that the 38 km. trail was opened. It is now one of Australia’s iconic Rail Trails, meandering as it does through the Yarra Valley, between the Dandenong Ranges and the Great Dividing Range. 2

At its Warburton terminus, the rail-trail is only a gentle 7 km. from the Big Pats Creek start of the tramway "Walk into History".

And meanwhile, and at the time of writing (January 2021), new rail trail projects are proceeding elsewhere in the Yarra Valley, adding to the wonderful recreational resource on Melbourne’s eastern doorstep.

1 In following years, the walking track was to provide a great training opportunity for incoming summer fire crews, keeping it free of vegetation being a good way to become familiar with bush-tools and associated operations.

2 Victoria was, following this success, to go on to lead nationally the development of rail-trails, there now being over 30 substantial popular rail-trails in use across the State, with more being proposed/developed. 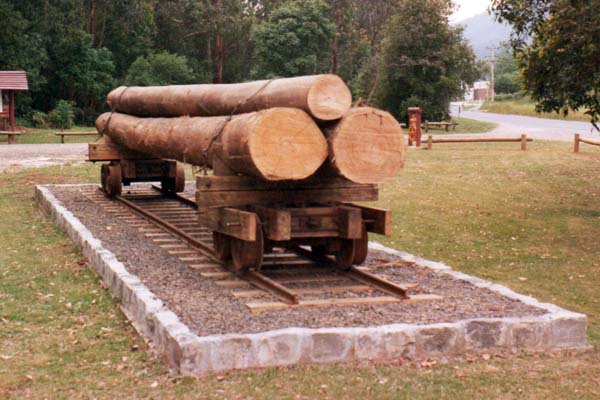 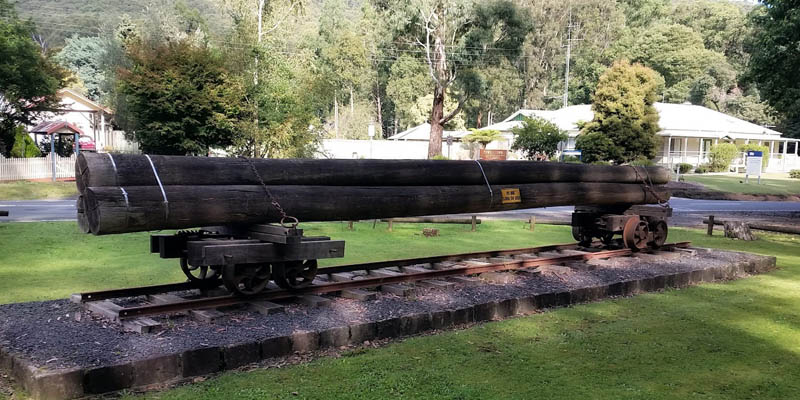 The assembling of the photo galleries, and the tramline maps have benefitted from considerable assistance by people from the Light Railway Research Society of Australia.

Stages in the re-creation of the rail carriage are shown in the slideshow below. Click on any image to open the gallery.

See How They Grow