A eucalypt seed is a truly remarkable thing. In most eucalypt species, an individual seed is around the size of a grain of sand. And yet the Genus includes, among its ranks, the tallest flowering plants on Earth, with individual trees well over 100 metres in height being recorded.

In the late 1700s/early 1800s, newcomers to the continent, that would come to be known as Australia, encountered flora and fauna that were unknown to ‘science’. First peoples who, over millennia, had built-up a detailed knowledge of the ecosystems they lived among, and moved between, saw their expertise largely ignored by the rush of new arrivals who were driven, initially at least, by survival in a seemingly hostile environment, and later by gold-fever.

By the late 1800s, as the gold ran out, and the populations of newcomers stabilised, towns and cities had become established. As they had been during the gold era, the surviving forests continued to be plundered for timber for all manner of uses. Nature, that included, in many parts of Australia, fire, was often somewhat forgiving, and some forests re-established themselves. But others struggled.

In Victoria, by the early 1900s, the Forests Commission, like its counterparts in other States, was struggling to understand the ecosystems that it had been entrusted to its care. And so, for example, if forests were harvested, sustainable management required them to be replaced. But how?

In May 1963, as a young probationary Forest Foreman, I was posted to the then Omeo Forest District. I was based at Swifts Creek, in the southern foothills of Victoria’s Great Dividing Range. As the State’s capital, Melbourne, and other cities expanded, forest harvesting levels were increasing in my new District.

At the time, the main approach to regenerating harvested forests, beyond ‘hoping for the best’, was to leave large, less merchantable trees, across the harvest area. After burning the ‘slash’ left on the harvest area, the large trees were then ring-barked, or poisoned to induce seed fall. In the latter operation we used a small axe with a spray mechanism attached. We’d drive the axe through the bark into the cambium layer, ease the bark out and spray the Tordon chemical into the cut.

We weren’t having much success at regenerating the logged areas by this method so we started collecting some seed (Figs. 1 & 2) using a ‘rack and canvas funnel method’. The eucalypt fruits, on small branches, were harvested, spread on porous racks, left in the Sun, and the seed subsequently collected below, via a funnel arrangement.

We collected enough seed to sow some harvested areas by using ‘pepper-pots’ clamped to a stick. After burning the remaining slash in the autumn, we’d walk through the snow shaking the pot. This wasn’t proving very successful either.

We then developed what was hoped to be a more efficient hand seed-spreader. (Fig. 3)

As harvest levels increased, so too did the need for seed. And among other things, drying the freshly collected, branch-bearing capsules to extract the seed was an increasingly difficult task. Our ‘wire racks /canvas funnel’ method described above, which was by then in use in most areas where timber harvesting occurred, saw the attached drum catch the seed OK, but the arrangement also caught the regular heavy rain, and precious seed was washed away. There had to be a better way!

At the time my wife Glenys taught at the Swifts Creek Higher Elementary School.

Being a small school in a small community, we all mixed together. A fellow called Paul was the geology teacher. He also liked polishing gemstones, while Andy Adams, the School cleaner, did also. And as it emerged, Andy had made himself a Gemstone tumbler.

Andy’s did this same job as the traditional tumbler shown above, but it consisted of an old powdered milk-tin, sitting on and driven by two shafts, and a small electric motor to rotate the tin of stones.

It seemed to me that if I made a similar, but much larger model of this we could make our seed drying more reliable, particularly in a secure garage at the District depot.

As our thinking progressed, a local welder also got involved, as did a fellow called Brian Shelton who had recently joined our local crew. One of the first things Brian did was to make a steel tray to catch the seed and keep it clean as the drum rotated.  Then he further improved my prototype using ingenuity and skill.

And so slowly, a more modern and far more efficient method of seed extraction evolved. The capsule-laden branchlets being placed in increasingly large revolving drums; warm air being passed through the drum; the capsules opening; and the seed being collected in a tray underneath. And all this away from the rain! (Fig.4)

And all these developments were being increasingly monitored by surrounding Districts, and by Head Office based specialists.

And the Swifts Creek innovation didn’t end there ...

Concurrently, the increasing demand for timber from Victoria’s eastern forests was leading to greater use of clear-fell harvesting in our District. This in turn needed more seed, to regenerate increasingly larger areas.

At the nearby town of Benambra, a young Ben Buckley had established one of Australia’s first aerial agricultural services and was, among other tasks, spreading super-phosphate for local farmers. (Ben would go on to become one of the country’s most experienced and innovative rural aviation pilots).

My District Forester at the time, Joe Adams, and Ben had become mates and it didn’t take long for the possibility of spreading eucalypt seed on larger, clear-felled coupes by aircraft, to reach the operational trial stage. Ben’s Piper Pawnee agricultural aircraft being modified to ensure the effective spread of the small eucalypt seeds. Indeed, ‘broadcast’ aerial sowing was to become increasingly practical, and cost effective, in the wake of a trial in the adjacent Heyfield Forest District in autumn 1964.

Along with seed storage, germination testing, the use of kaolin to bulk the seed up prior to spreading, and the use of insecticide to minimise seed harvesting by ants; the evolution of aircraft in forest care and management is another story best told by others more qualified.

I grew up on a small farm near Club Terrace, in Far East Gippsland. At 14 I left school, gaining employment with the Shire of Orbost as an assistant patrolman on the Combienbar Road, picking and shovelling gravel onto a truck and filling potholes, repairing bridges and clearing fallen trees.

A couple of years later I scored a job with the Forests Commission at Cann River. My early duties saw me assisting in logging supervision.

A few years later I was invited to attend the 1962 Forest Foreman School which was to be held, over six months, at No. 1 Camp within the Mt. Disappointment State forest. From the School I was posted to Swifts Creek, as I have set out above. (Fig. 6)

In 1976 I left the FCV, taking a position as the Forest Operations Manager for East Gippsland based Ezard Timber Industries.

In 1987 I was appointed Forests Operations Manager for J. L. Gould’s Logging Co. which operated in Victoria’s Central Highlands. I was based in Marysville. I retired in 1990.

Sometimes life can seem to almost complete a circle. For a few final years Glenys, my wife, and I became a two-person seed collecting crew, harvesting Eucalyptus nitens (Shining Gum) seed in the forests above Marysville, in conjunction with forest harvesting operations. 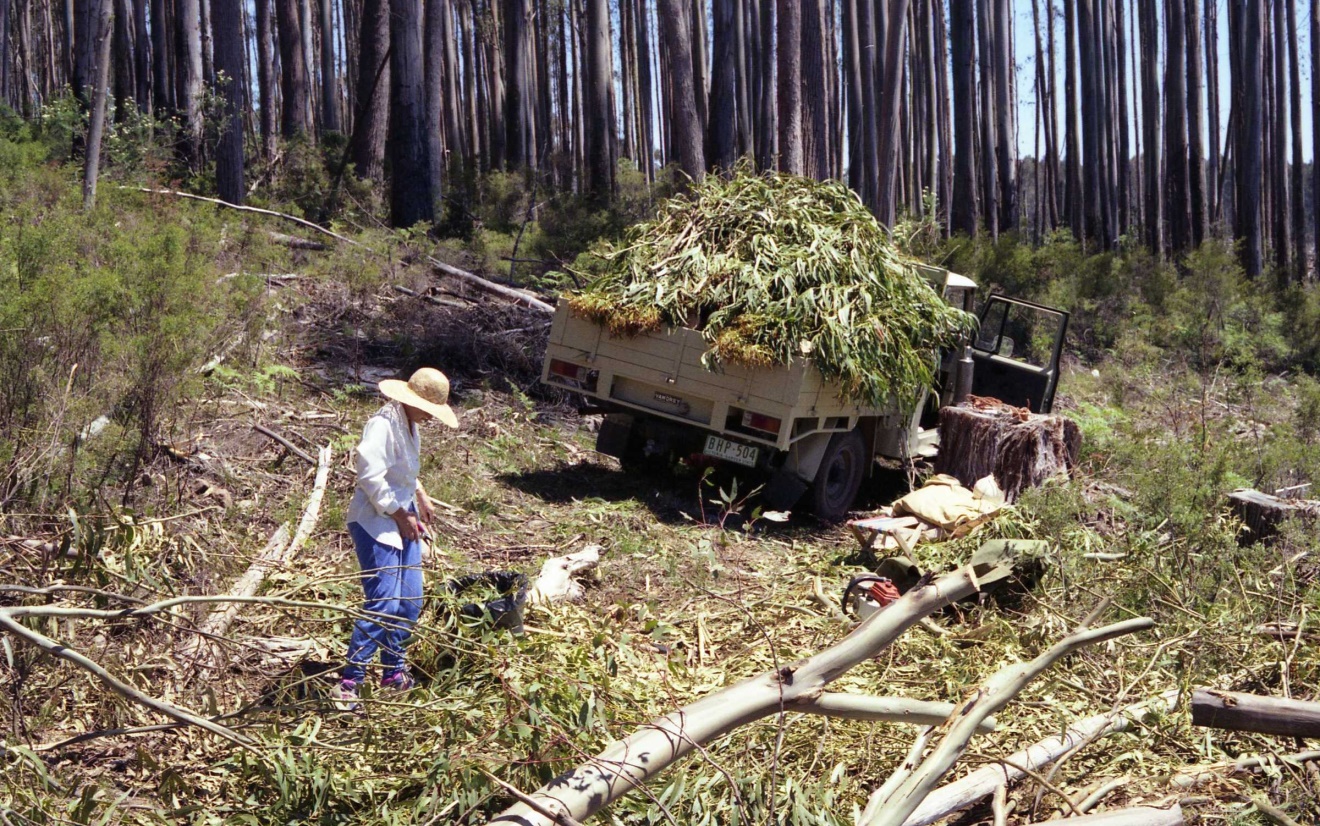 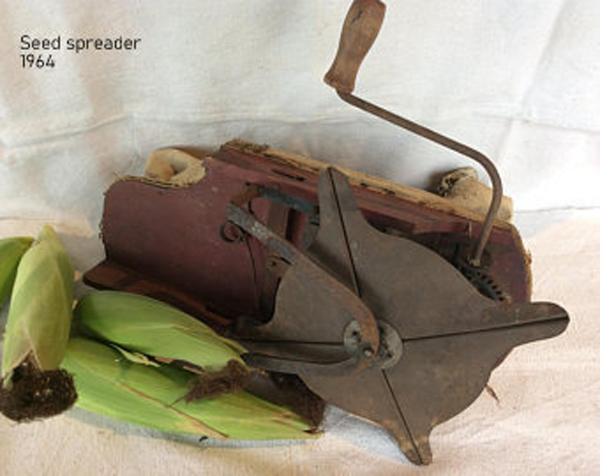 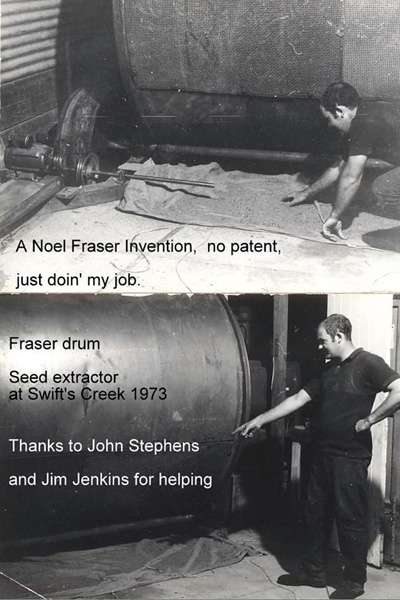 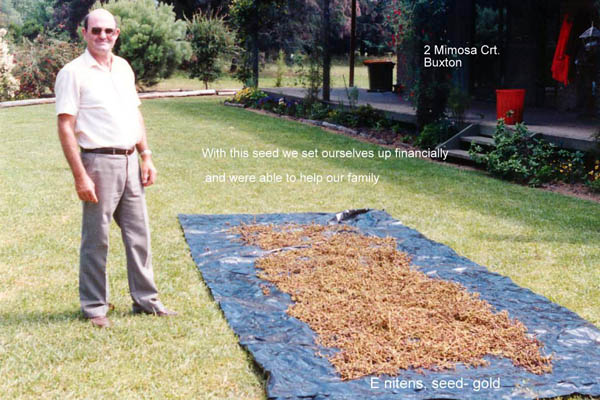 During those years the seed was highly valued, and much of what we harvested was sold for export to South America. Our seed collecting approach, while pretty basic – no access to mechanical extraction drums anymore – involved early starts to beat the Sun, and hard yakka, but it was enjoyable, and helped secure our retirement. (Fig. 5)

We then retired to Lakes Entrance where, among other things, I spent a decade or so collecting photos from the early FCV days, with the help of work-friends and colleagues. 1

In summary, Victoria’s forests were good to me and my family and I have great memories of the places I lived and worked, the friends I made, and the colleagues I shared the bush with. To this day forests remain some of the best places I know. 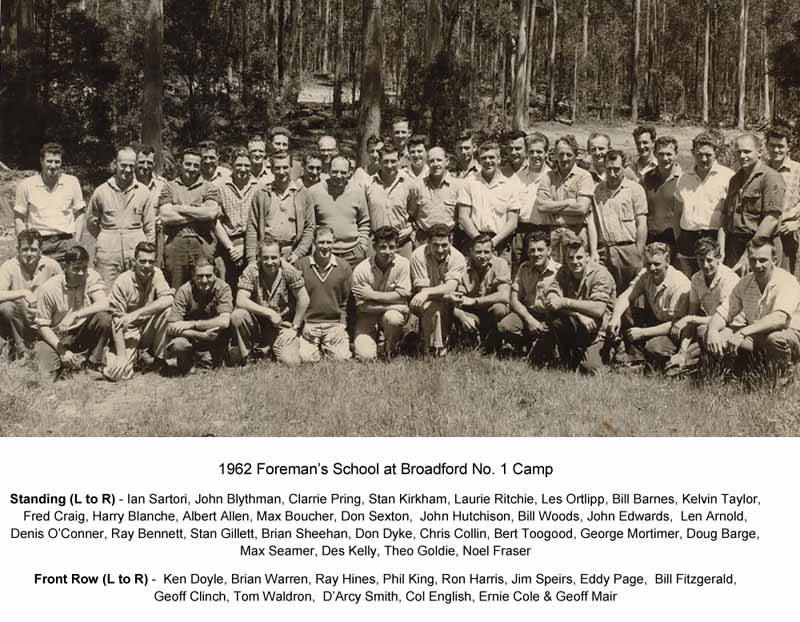 1 Noel’s photograph collection is now a significant part of the FCRPA’s extensive image library, much of which can be found on this website.