The article was written by Norm Endacott

In 1954 the FCV still generally managed plantations and native forests through separate organisational arrangements. Measurements of wood volumes in the article are given in super feet, which would have meant super feet, Hoppus Log Volume.

The area of Reserved Forest is approximately 76,000 acres, that of Protected Forest is negligible. About 40,000 acres are Messmate-Peppermint-Gum forest of good quality, with a relatively favorable silvicultural history and therefore highly productive. 90 acres of pine plantation at Mt. Franklin, to be increased to 145 acres, is under District control.

The District straddles the Dividing Range, and embraces the headwaters of the Loddon, Moorabool, Werribee and Lerderderg Rivers. Topography is undulating foothill type, except in the valley of the last-named stream which for several miles is gorge-like. Rainfall ranges from 30" minus to 40" plus.

Utilization activities - chiefly sawmilling and log production. Average annual log cut is 10 million super ft. A notable feature is the small size of log being utilized, average volume being about 200 super ft.- with a minimum of 40 s.ft.  Utilization is very intensive, and in the more accessible areas even mill heads are readily devoured for firewood. Large numbers of poles and piles are cut intermittently. In the past, firewood has been sold in large quantities to Ballarat industries, but this is a diminishing market. Prospects are bright for the establishment in Daylesford of a wall-board factory (Did this become the CSR fibreboard plant in Bacchus Marsh? - editor) which is expected to consume upwards of 5000 tons per annum of firewood-quality material. Departmental emergency firewood operations have been carried on in the past, and accumulated wood stocks are now being sold.

For at least 20 years selective and controlled felling has been enforced, and for the past eight years or so the District's annual log cut has been related fairly closely to what is believed to be the MAI. The current operations aim at reducing overstocking and removing defective trees as a prelude to intensive sustained yield management.

Regeneration/liberation felling of "cull" trees, both licenced and departmental, has recently been undertaken.

Engineering works include road and dam constrution, and operation of a quarry and crusher for production of road-surfacing material. Approximately 51 miles of B class surfaced road and 9 miles of unsurfaced road are in existence. District earth-moving equipment comprises one Class3 dozer 1, one medium power grader, one compressor, and one Class4 2 tractor with heavy drawn grader (last two items shared with Trentham District).

Although the forest constitutes an appreciable fire hazard, the fire protection problem is not so acute as in many other districts owing to relatively small size of district, favorable topography and good roading system, and intense forest activity, which gives large reserves of man power for fire-fighting. Four lookout towers are connected by phone and radio to District HQ and three TRP-1 3 sets are operated. Only receiving radio equipment is installed at HQ. Power pumpers in use are one Coventry Climax 4 trailer, two Pacific Marine 5,6 with 5000 ft of 1½" hose, one Rex 7 and one Quench Quick 8.

Scout-car 9  is fitted as a tanker unit during the fire season, and 4/400 gallon tanks are used to convert other Commission and private trucks to tankers as required.

1,2 Class 3 Dozer ≈ 9-10 tonne, Class 4 Dozer ≈18-22 tonne
3 TRP-1 Specifications
4 Coventry Climax FWMP Godiva pump. Used with 1½" or 2½" canvas hose lines for direct attack, or as a filler pump. Delivered 300 GPM or 120 PSI.
5 Pacific Marine Type “Y" High Pressure Pump (fitted small fuel tank) Designed to be used on fire tankers as a support pump where fuel is at hand. Fitted with aluminium base frame to attach to purpose built mounting bracket. Used with 1½" canvas hose lines from tanker for high in the forest canopy operation. 10 HP two cylinder water cooled two stroke engine. Positive displacement gear pump. Self priming. Delivered approx.150 GPM or 150 PSI.
6 Pacific Marine Type”Y” High Pressure Pump (fitted with a large fuel tank and long carry handles. Provided easy carrying by two men to off road dams and streams.
Used with 1½" canvas hose lines for direct attack. Other specifications as for small tank version.
7 Rex 3M Pump.  Engine 4 stroke 1.68 HP single cylinder engine. One of several small fire pumps purchased  by the FCV in the 1950’s for general fire fighting purposes. Delivered approx. 50 GPM @ 3600 RPM.
8 Quench Quick Pump - specifications unknown at this stage
9 The M3A1 White Scout Car had a transfer case that did not allow disengagement of the front wheel drive. ie it was constant four-wheel drive but without a compensating differential or front drive shaft compensator, and thus was an absolute pain to drive on hard surfaces due to axle wind-up. 590 were delivered to Australia from the USA under Lend-Lease arrangements during 1942-43.  The M3A1 had a conventionally aspirated 5.24 litre six-cylinder in-line side valve model JXD Hercules petrol engine coupled to a 4 forward/1 reverse gear box and a two-speed transfer case. Armour was ¼ inch thick except for the front windscreen plate which was ½ inch. The one pictured is a standard body Scout car but has had the rear panel cut out to make a door opening. Wheel base was 80 inches. (Source: Mike Cecil) 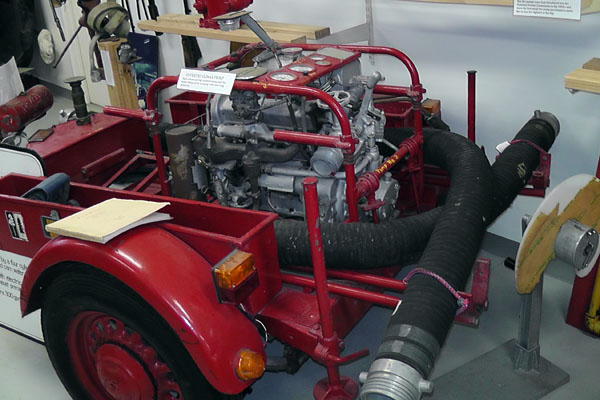 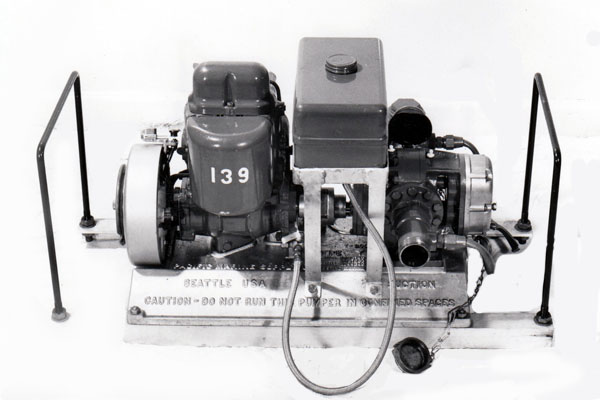 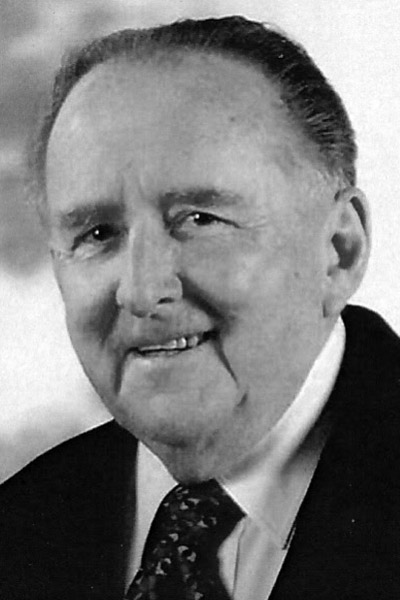 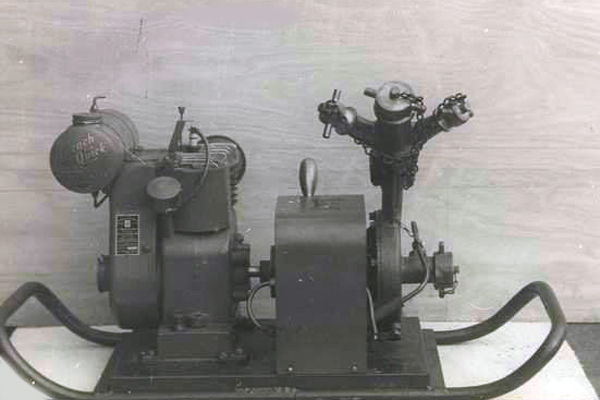 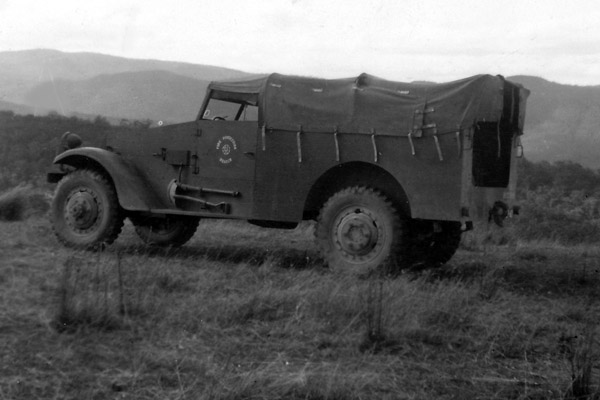