The intention of this article, at this early stage of development, is primarily to direct you to other material available through this website. If additional material becomes available it will of course be added. It also needs to be said that this article would not have been possible without the work done by Garry Kerr, and his generous permission to use his work on this site.

In 1995 Garry produced a book entitled "Of Sawyers and Sawmills. A History of the Timber Industry In Victoria's Far South West." With Garry's permission we have reproduced the book and and the quotes below come from that book. While there are sawmill site maps in the book a web version is also available.


"Portland was first settled by sealers and whalers as early as 1828, and sawpits were soon established to provide construction timber. Portland Historian J. Wiltshire credits Henry Reid with constructing the first sawpit in 1833, in order to provide timber for houses and other buildings associated with his whaling activities. The closest stands of good timber were situated along the Northern shore of the bay between Portland and Narrawong, and this was where the first sawpits were dug."

"The forested areas of far south-west Victoria are dominated by messmate stringybark and brown stringybark in pure and mixed stands, with peppermint and gum eucalypts occupying wetter sites. To the north-west, in the area of Digby and beyond, red gums become the major millable species. To the east and north-east the country opens into grazing land, though during the early years of settlement there were useful stands of timber between Port Fairy and Warrnambool."

Two other articles on this site have come directly from Garry's book, and they cover the working lives of two FCV Overseers who worked in the Heywood Forest District - Tim Hodgetts and Dick Aldridge.

In 2007 Garry also produced a video entitled "Stringybark" that covers oral histories related to the use and management of these forests.

Ken Morrison graduated from the VSF in 1949 and his first posting as District Forester was to Heywood in 1960. Ken has written about his experiences at Heywood and the quotes below come from his article.

"The dominant valuable timber species is Messmate Stringybark which in concept is well away from its normal habitat being better known as a mid-elevation mountain species and not one associated with elevations of less than 100 metres. However the far south west Victoria was unique in Eucalyptus species being located out of their normal habitat with the presence of Eucalyptus kitsoniana (Gippsland Mallee) at Cape Bridgewater and E. pauciflora (Snow Gum) at Greenwald being prime examples. Another species that played a role in utilisation was Brown Stringybark and while not as readily available its actual qualities were better than Messmate. Yellow Gum, White Top Peppermint (E. willisii) and Red Gum also contributed in a minor way to the production of forest produce. In the 60s, production of firewood was important for heating while there was an ongoing demand for fencing material, poles for various farm and communication needs, bee keeping, etc."

"The original Forests Commission of Victoria Heywood Forest District extended from Edenhope to the coast and from the South Australian border to Hamilton and Warrnambool. The Headquarters were located at Heywood, it being the most convenient to the most productive native forest areas. Prior to the 1950's, Forests Commission of Victoria operated with two separate branches in the field, namely Plantations and Hardwoods. Each branch was independent and had their own office, staff and work force, sometimes located in the same town but often at different locations. Thus the Rennick Plantation located on the South Australian border, while being in the Heywood District, was entirely divorced from its neighbour and annexed land from the original District as plantations were established. During the late 1950's there was a complete re-organisation of the field structure which involved the amalgamation of plantation and hardwood areas incorporated under the one District Forester and the one District Headquarters. The outcome was that the original Heywood District was divided into three with headquarters at Rennick (Lower Glenelg), Casterton (Casterton) and Heywood (Heywood). The main emphasis of the Lower Glenelg Forest District was on plantation establishment on the State border and later on the east side of Glenelg River at Kentbruck in the Heywood District, and this was subsequently annexed to the Glenelg Forest District. A substantial area of Brown Stringybark forest between the two plantations supplied hardwood logs to South Eastern Land and Mercantile, a small sawmill in Mount Gambier. Casterton Forest District was mainly involved in the management of a significant area of Brown Stringybark and Red Gum forests, fire protection and later some plantation establishment."

"By 1960 there were sixteen hardwood sawmills drawing timber supplies from the Heywood Forest District Public Lands. These were Clay & Pitts and George Thomas at Gorae, Carter Bros and Les Mayes at Heathmere, Benbows at Heywood, Reg Thomas at Mt. Clay, Clarrie Porter at Homerton, Laurie Porter at Dunmore, Laurie Porter at Hotspur, Alan Fink at Milltown, Moores at Drumborg, Vince Davies at Digby, Kinmonth at Casterton, Sauders at Tyrendarra, S. E. And Land at Mt Gambier and Aston at Dartmoor. As well as the licensed sawmills there were a few that were owner owned and operated spasmodically from their own private property supplies." 2

"It is believed that the actual fixed allocated licenses of varying volumes to those listed sawmills would have exceeded 10000 cubic metres but in addition to that some of the bigger mills were boosted with departmental supplies and in some instances from private property."

The public and private forests of the area also sustained a wattle bark industry of significant proportions. See: Barkopolis 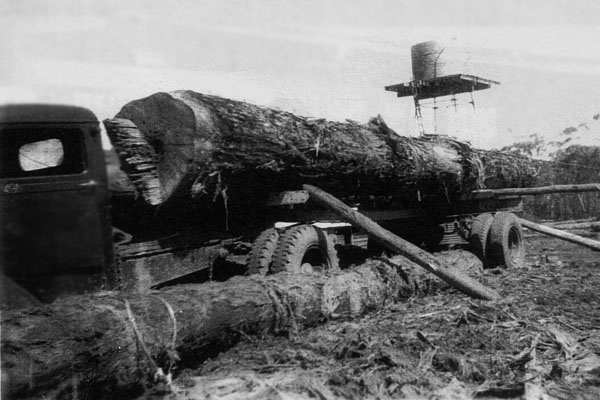 A 72ft long sawlog at Thomas's Sawmill - believed to be the largest delivered to a mill in the Portland Shire.
1954
Source: G Kerr 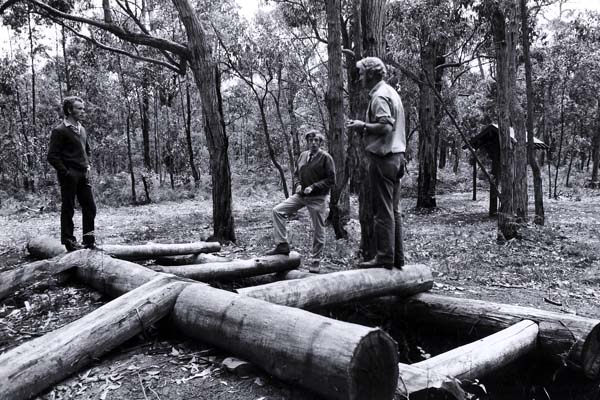