Athol Hodgson, who died on 5 August 2018, made a significant contribution to Victorian forestry in a number of areas. Born in Wagga Wagga in 1930 he spent his early years on the family farm at Nariel in North East Victoria where, on at least one occasion, he helped the family protect the property from bushfire. Schooling at Nariel, Corryong and then Bendigo High School provided him with the qualifications to enter the VSF from which he graduated in 1950. He went on to get his Degree at the University of Melbourne in the mid-1950s.

As with so many, Athol’s first posting after the VSF was to Assessment Branch. He then spent periods in the Bruthen and Nowa Nowa Forest Districts, in Fire Protection in Head Office and as a VSF Lecturer – the latter role he said quite frankly he would have preferred not to have been given.

Athol became the FCV’s second Fire Research Officer, following Val Cleary, in 1962. He stayed in this role until 1971, and in this time was a driving force behind significant innovations in the way the FCV managed its fire responsibilities. It was in this period that firebombing was introduced - it was to become a routine part of fire suppression operations; more rigour was placed around the science of fuel reduction burning and regeneration burning; new aerial ignition techniques, using both fixed and rotary wing aircraft, for both fuel reduction burning and backburning, came into being; and research into the ecological effects of fire was commenced.

He was awarded a Winston Churchill Fellowship in 1966/67 to study fire management in North America, and is also a graduate from the National Advanced Fire Behaviour School, Marana, Arizona.

In 1971 he became Manager of the new ‘Recreation’ Branch. By 1972 the Branch’s responsibilities had been broadened and it became the Forest Environment and Recreation Branch (FEAR) within the FCV. This development signalled the FCV’s increasing awareness of the environmental issues that were emerging, particularly at that time in the United States, and the fact that our forests were slowly, but increasingly being used by the community for recreation pursuits. This new direction did not necessarily have whole-hearted support throughout the FCV (as evidenced in Athol’s ‘oral history’ by the day a Commissioner – unnamed - came into the Branch’s office when Athol was out, and told staff “that the Commission wanted every tree they could get, and the recreationists can sit on the stumps”). There is no doubt that during his time in this position the FCV did move to new ways of managing the State’s forests. The fact that the Commission was, for example, and after initial opposition from the Public Service Board, able to recruit three Landscape Architects from the USA spoke volumes about the change in emphasis Athol played a key role in.

From the FEAR Branch Athol was promoted to Chief, Division of Forest Management in 1977. Often during this time he was also an Acting Commissioner while the then Chairman, Ron Grose, acted as Head of the Public Service Board. Athol became a Commissioner in his own right in May 1983, but this was right at the time the FCV was making way for the Department of Conservation Forests and Lands (CFL). In 1984 he returned to the Public Service as Chief Fire Officer with CFL, and he remained in that role until retirement from the public sector in 1987. Those who worked for him in that period would, we think, acknowledge his credentials as a “good boss”. He was innovative, certainly not afraid to take a risk and very supportive of his staff.

He was a Member of the Board of the Country Fire Authority, and a Member of the State Disaster Committee during his time as the Chief Fire Officer. He was made a Member (AM) of the Order of Australia in 2012 ‘…for service to forestry science, particularly the development of land management and bushfire risk reduction strategies, to emergency service organisations, and to the community of rural Victoria…’

In so-called “retirement”, Athol provided expert advice to Inquiries, and as part of legal actions related to bushfires. He was also a member of the Stretton Group, established in December 2003 following the disastrous South East Australian bushfires in 2002/03. He was the Founder and President of Forest Fire Victoria Inc.

His energy, right up to the time of his death was considerable, as evidenced by the number of articles on this site (see above) that he contributed in a very short time, and his legacy is clear and considerable. 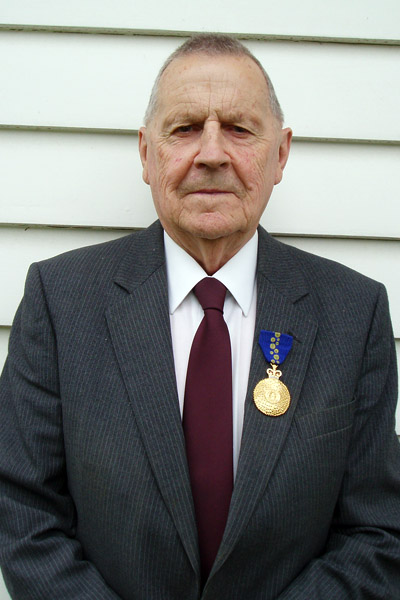 Athol Hodgson in 2012 after being awarded the AM
Source : A Hodgson