John was one of 88 persons interviewed in 1993 by Greg Borschmann in an oral history project of persons involved with Australia’s forests and woodlands (The People’s Forest). I have drawn on my father’s tapes for much of the following account.

He was born in Riga, Latvia in 1910 to Estonian parents. His father had wanted him to follow in his footsteps and study theology, but did not enforce his view when John said he wanted to pursue forestry. He chose forestry because he developed a love for life in the country, having spent most of his long summer school holidays on farms of his relatives in Estonia, some of whom were foresters.

He said it was an exciting era for forestry in Latvia after 1918, when the former private forests under disparate ownership were consolidated into the public estate and brought under sustainable management. John enrolled at Riga’s university in 1931 in forest science, a 4 ½ year course, and graduated in May 1940 after interruptions from a voluntary break taken after 2 years and then military training. They were turbulent times because the Soviets occupied Latvia in June 1940. There were political purges and many locals in positions of importance were transported to Russia and replaced by Russian immigrants.

John was pleased to obtain a posting in Kurzeme, distant from and west of Riga and political turmoil there. His forest district was about 4,000 ha in area, but he had little time in the field because he was forced to concentrate on office work to satisfy the Russian administration. The Russians set unrealistic targets for accounting and reporting, and to meet such deadlines and avoid persecution, he at times worked up to 36 hours without a break.

In 1942 when the Germans occupied Latvia, John was moved to Elkskene forest district (near Ventspils on the west coast) because of his fluency in the German language. This district was prized by the German military for hunting game, apart from its importance in producing timber for war needs. His duties involved managing the forests for increased timber production and export to Germany, as well as providing hunting opportunities to military leaders. The forests became increasingly hazardous areas because they were hideouts for both the Russian partisans who infiltrated the area to carry out sabotage and for Latvians hiding from the Germans. This led to frequent violent conflicts and deaths.

In the last days of October 1944 as the German forces left, John escaped from Latvia and joined his family, who had left earlier, in Poland. However, the Russians arrived there a month later and the family was forced to hide to avoid transportation. He obtained work there in forestry, at first tapping trees for resin. Later, he was given the task to help the Poles develop Russian accounting procedures, which he already knew from Latvia, in several forest districts.

In June 1946, John with his family escaped from Poland to West Germany where they spent three years in a refugee camp at Wedel near Hamburg. Here also John worked for a time in the forests, cutting firewood.

Soon after the family’s arrival in Australia (Melbourne) in June 1949, John started work as a carpenter in the Balcombe army camp on the Mornington Peninsula. There he attended an arbour day and was introduced to a man from the Forests Commission. He was Alf Lawrence who would become the new Chairman of the Forests Commission. That led to beginning work in August at Olsens Bridge on a new reforestation scheme in the South Gippsland hills. There he began work as a leading hand of a tree planting crew together with some 30 other displaced persons from Western Europe. After about two weeks he was given the task to develop plans for the program, involving survey and mapping and a projected planting program for some 100,000 ha of denuded and unproductive land.

In1950/51 John was appointed to a new position of Plantation Research Officer, later based in Mirboo North, where he remained until November 1970. He was instrumental in developing appropriate planting techniques, including a new program for native hardwood plantations. That involved identifying the most appropriate species, nursery techniques, site preparation, improved planting methods, control of damage by browsing animals, and ultimately plantation maintenance and thinning programs. In the first year of the program about 2,000 hardwood seedlings were grown and when John left, close to a million were being produced annually. He had also developed a new planting spade for tubed-plants, which increased planting rates fourfold and which became widely adopted in Victoria. He later demonstrated that eucalypts could be successfully grown and established as open-rooted stock in plantations. 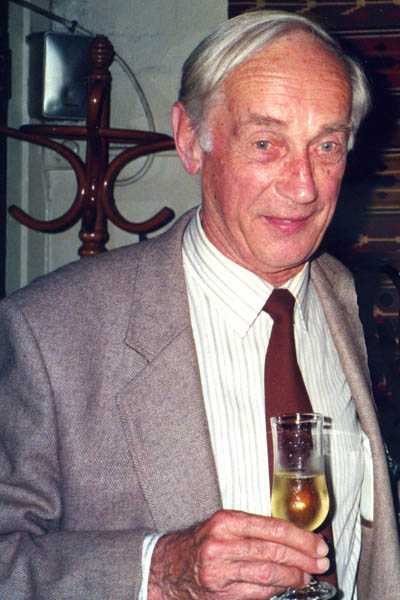 In later years John would take the opportunity to revisit the reforested areas and look at them with pride. He said it was a thrill to see what had been accomplished. His first impression of the Victorian landscape had been one of shock, prompting the question – where am I, this is like Mediterranean Europe and not real Australia?

In his taped interview in 1993 he was asked whether it seemed ironic that he, a forester from Europe, would be instrumental in pioneering reforestation of Australian native forests. He replied that what he had done was to use common sense, and that he liked the Australian nature and native forests uppermost. He always felt that pines were out of place here and openly promoted that view. He regarded forests as a living organism of trees with undergrowth and wildlife. He worked against the common view at the time that trees were to be grown merely for their value as timber and that their only value was economic.

In 1970 John moved to Macedon, working in the forest nursery there for five years before retirement. There he enjoyed promoting native species to the public for landscape planting. He was very encouraged by what he termed as the younger generation, who had a similar outlook to him and a vision to re-establish native vegetation in the landscape, rather than the cut it down mindset of many in the earlier generations.

John continued living at Mt Macedon after retiring from work in 1975. In January 1983 his wife Rita passed away after John had nursed her for over a year, with motor neurone disease. A month later his house was razed to the ground by the Ash Wednesday Fire around Macedon, destroying over 600 homes and seven lives. He just escaped with his own life, by sheltering at the Counter Disaster Centre opposite his home. Over a year later John rebuilt at Macedon and lived there until near the end of his life in November 1996. He would be delighted to know that his grandson, Simon, is now working for Hancocks Plantations Victoria in some of the plantations he had established.