With contributions from Brian Fry and Peter Lawson

Arnis Heislers, Peter Lawson and Brian Williams have also written about Roger's life and career in this article submitted in August 2020.

This originally hand-written letter from my brother-in-law, the late Roger Cowley (1940-76) to his “little sister” (aged 14 at the time) turned up in family archives. Matching the date with the days puts the year as 1964. The letter gives an account of fire-fighting half a century ago (and when people still wrote real letters). Roger went through the Creswick Forestry School in 1958-60 (dux of the school) and Melbourne University in 1962-63.

He was counting Alpine Ash seedling regeneration (and fire-fighting as required) for the Forests Commission Victoria in the Connors Plain-Mt Skene area of Victoria’s alps, together with Peter Lawson (a fellow graduate).

The “frog” was a bird-seed-filled cloth frog, not a real one (fashionable at the time). The construction of the “Tamboritha Road” a few years previously had been a major investment for the Forests Commission and opened up Alpine Ash forests for logging (shock/horror now) north of Heyfield (Victoria).

I passed this on to Brian Fry (President of the “Retired Forests Commission Retired Personnel Association”) who provided some images and the address of Peter Lawson (now living in Queensland), who, in turn, provided further images, some of which are included in this article. This was the sort of stuff that attracted we teenagers to forestry in the 1960’s. Half a century later and most of the areas are some form of park, the Connors Plain camp is long gone, and we don’t do that sort of higher altitude stuff so much any-more. GOD (“Good Old Days”) is depicted here, according to Brian. There’s a nice lot of memories associated with this stuff.

Both Peter and Brian noted how much they gained by exposure to the Overseers and work crews in this sort of territory and that they were in awe of the (then) older foresters like Jeff Brisbane, Moray Douglas, and John Macdonald. Roger had worked up there the previous year with Forester Sid Cowling, and the crew were not slow to refer to them as the Chinese twins – Cow Ling and Cow Lee. Peter also recalled the scary fun of driving the “blitz” shown in the camp photograph: - a V8 motor sitting just beside you to keep you warm or hot and deaf, a load of water to give you plenty of momentum, very inadequate brakes, and the motor-sport thrill of double-declutching when going down the long grade to Licola if you decided to risk changing down (get it wrong and you were in big-trouble!). Apparently arriving at Licola gave you a warm glow because you’d survived the trip. I wonder if modern forestry graduates (are there any now?) get this sort of toughening-up stuff? 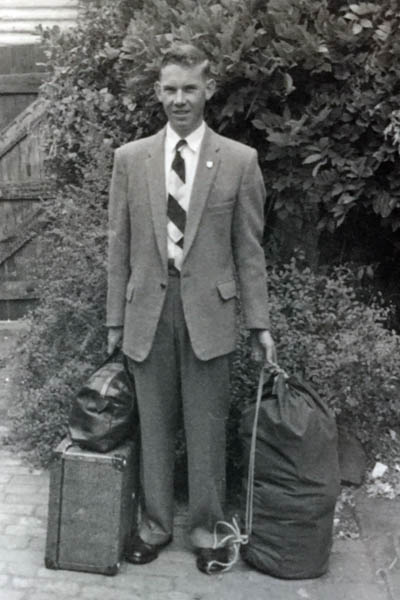 Roger Cowley heading to the VSF
Photograph from about February 1958
Source: L Bren