For tens of thousands of years humans, and the natural environment, co-existed in relative harmony in the area now known as south-eastern Australia. From 1788 however, sustained migration, sponsored by the British, commenced.

The discovery of gold, in the 1850s, was to result in a literal stampede of humanity, from across the Globe. Among other things it was to be a brutal time for the environment, and particularly for the area’s forests and woodlands, as the skeletal British-based bureaucracy struggled to adapt.

In 1882, one of Victoria’s first foresters in the then British Colony was appointed, to supervise the Ballarat-Creswick State Forest. Over the next couple of decades this remarkable individual, and truly committed public servant, John La Gerche, battled to deal with what he termed ‘…the great (forest) slaughter…’ and its aftermath and, in so doing, became a great example to those who, to this day, follow in his footsteps.

Until the early 1990s, few people knew of the quiet, dedicated public servant who worked in the Ballarat-Creswick State Forest between 1882-1897. His records were among the files of the 19th century Victorian bureaucracy. But a series of events led not only to his rediscovery, but to two major tributes to his place in the history of Victorian forestry.

ln the 1960s La Gerche's pocket books were found at the Victorian School of Forestry at Creswick and, in the mid-1980s, his letter-books turned up in a cupboard in the then FCV's head office in Melbourne.

By the late 1990s there was a Creswick-based walking track named after him and, in 1998, a very accessible biography, "A Foresters Log", written by historian Angela Taylor, was published.

Born on the 22nd of May 1845 on the island of Jersey, John La Gerche was as the only son of Jean La Gerche and Marguerite La Mottee. His surname was a remnant of the island’s Norman heritage and growing up John would have spoken fluent French as well as English. The La Gerche family were not only prominent farmers on the Island but his father was the local constable and Lieutenant of the local militia.

John grew up on a six hectare farm which had been owned by the family since 1670. Between 1857 and 1862 he attended a college for boys and excelled at his studies winning prizes for proficiency in languages - English, French and German - as well as for mathematics.

At twenty years of age, he immigrated to Victoria. One of only four ‘Unassisted Cabin Passengers’, he sailed on the ‘Agra’ from London on 15 December 1864, and arrived at Hobson’s Bay on 30 March 1865.

John listed his occupation on the ship’s manifest as ‘gentleman’ and it's considered likely that he had come to take up land as a new settler, rather than chance his luck as a gold-miner.

At Geelong, on 17 July 1871 he married the Jersey-born, Elizabeth Nora Bendixon.

We know little about John La Gerche’s employment before he became a small sawmill proprietor in the Bullarook Forest in 1870. In 1875 his Wombat Forest-based sawmill fell into financial difficulties and was foreclosed. Competition from more powerful neighbouring mills and the increasing shortage of large trees may well have put his mill out of business.

At thirty, with a growing family, the need for secure employment may have set La Gerche on the path to becoming a public servant. In 1881 he became a timekeeper in the Public Works Department.

European Settlement, Gold and the Forests

Before European settlement in the early 1800s, around 88% of the nearly 24 million hectare Colony that was, in 1901, to become the State of Victoria was tree-covered.

The Victorian gold-rush of the 1850s followed what had been increasingly wide-spread and indiscriminate land clearing for agriculture and settlement. Gold was to become a major cause of forest loss and degradation. Over the next three decades, large areas of forest were cleared in the scramble to produce timbers for many aspects of the associated mining operations. For example, in 1873 it was estimated that were some 1150 steam engines in the gold-mining industry, devouring over one million tons of firewood annually.

Once, an open eucalypt forest of messmate stringy-bark, peppermint, and gum species had shared the sedimentary slaty soils of the Ordovician bedrock country between Creswick and Ballarat with rich alluvial gold deposits. Indeed, the stringy-bark tree was an important index of auriferous (gold-bearing) soil, which helped signal the frenzied ‘rush’, not a settled life, and feverish felling, not fruitful tree cultivation.

Meanwhile, the Colonial administration was slow to react to the forest plunder and it was not until 1862, that the then Assistant Commissioner of Crown Lands reserved some 14,000 hectares of forest near the goldfields. Areas of forest around Creswick were reserved later, in 1866. 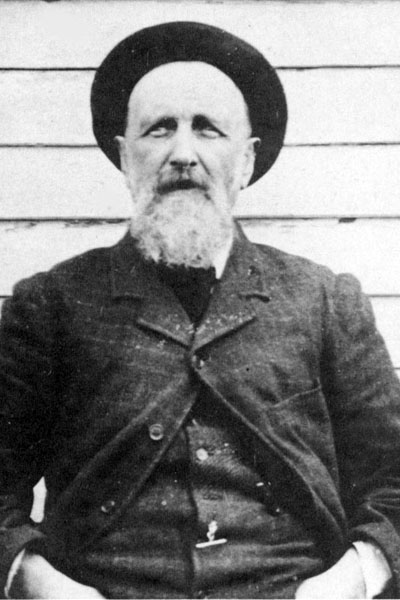 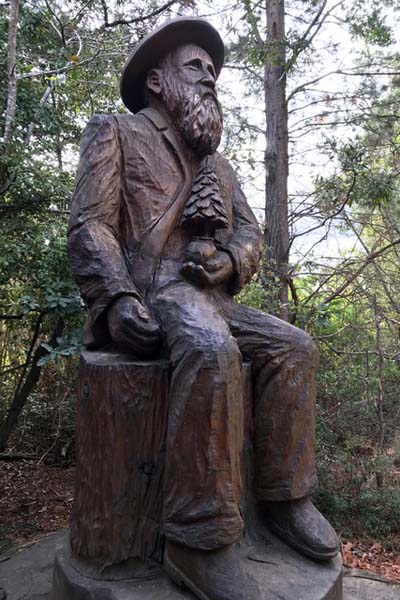 ‘….La Gerche was one of sixteen foresters appointed to the Agriculture Branch, Department of Crown Lands and Survey, in the early 1880s. This was the cusp between the past decade of rampant destruction of Victoria’s goldfields forests and the promise of hope held out for the next decade by the 1884 Land Act. This Act recognised State Forests as part of the official Victorian landscape in a way they had never been before - as significant for public purposes. However, the paltry annual government expenditure on forest management averaged only £4000 in the 1870s and early 1880s. Expenditure did not increase to £18 000 until 1892. By then, the State Forests and Nurseries Branch had been transferred from the control of Lands and Survey to the Department of Mines….’

As a Crown Lands Bailiff and Forester, La Gerche’s instructions were to supervise the Ballarat and Creswick State Forest and to take legal proceedings under the 1869 Land Act against all persons found cutting or removing timber in the forest.

‘…As a Crown land bailiff, the regulations (he) had to work with were poorly framed. The licensing system was permissive. In the Ballarat and Creswick Police Courts, he faced magistrates sympathetic to the demands of the mining industry. And he was pitted against the best lawyers, who delighted in picking legal loopholes which got forest offences dismissed.

From below, on the other hand, La Gerche was assailed by prop cutters, wood carters, sluicing parties and prospectors who repeatedly breached forest regulations. Forest dwellers who occupied small sites under a Miner’s Right were a nuisance. Some harboured illegal prop cutters; others pilfered saplings and stripped bark for domestic needs. Some started summer bushfires; others kept mobs of greedy goats which devoured precious seedlings. In short, La Gerche was caught between a rock and a hard place….’

From La Gerche’s records it’s clear he regularly rode the boundaries of the forest on his horse alone and often stayed overnight to guard a particular site. When he heard the sound of the axes he would follow the trails of the buggies illegally removing produce, often in the early morning mist. But the most successful and notorious timber cutters simply avoided him which wasn't hard to do so in the vast undulating forest. And meanwhile, it’s clear that his diligence was not always supported by his distant superiors, and not surprisingly his tactics made him locally unpopular.

It is also clear, however, that La Gerche resisted pressure to clear out the Chinese residents in the forest.

A part of John La Gerche duties required him to grow and nurture a new crop of trees to restore the landscape scarred by mining. He, not unreasonably, complained however that he couldn't achieve adequate reforestation until he controlled illegal cutting.

And so, in 1887, La Gerche recommended that forest reserves should be closed until the trees had attained a diameter of 30.5 centimetres. During that time special licenses could be given for the purposes of cutting the scrub and crooked timber, leaving the straight saplings. Despite lacking formal forestry training or guidance, La Gerche was to initiate a pioneering thinning experiment on around 40 hectares of Creswick forest to remove scrub and crooked trees but retain the healthy straight saplings.

La Gerche began the immense task of restocking of the forest modestly, in 1883, by experimenting with blue gums seeds. This trial was not successful, but he was not easily discouraged; continuing with other eucalypt species.

Earlier, in 1872, a government nursery had been established at Macedon by Victoria’s first “Overseer of Forests and Crown Land Bailiff", William Ferguson. La Gerche worked closely with Ferguson, both to obtain seedlings and advice.

In 1887 La Gerche established a small plantation in Sawpit Gully, north of Creswick. He chose the site because he was advised that its slopes and soils were “the very thing for growing pines”. The location was highly disturbed by old gold diggings but it had a water race snaking around the spurs. Later, in 1888, La Gerche established a nursery in the area.

Indeed the pine plantations in the locality have their genesis in the 1880s. They are a living monument to John La Gerche’s pioneering reforestation of old diggings. (These days La Gerche’s Sawpit Gully Plantation is listed on the Register of the National Estate in recognition of its historic, environmental and aesthetic significance).

By 1889 La Gerche had planted over 19,000 seedlings in the plantation areas near the new nursery. The Creswick climate proved harsh however on the first plantings, with low rainfall and some characteristic severe frosts.

By 1897, the year of his departure from Creswick, nearly three-quarters of his forest had been thinned, much of it fenced and many plantations established. Mining was in decline and pilfering had practically ceased. The number of cattle in the forest had greatly diminished and their owners had departed. And remarkably, La Gerche had also found time to personally plant over 100,000 seedlings.

Re-arranging bureaucracies is not new phenomena. Between 1856 and 1907 the responsibility for the administration of Victoria's forest estate was shunted back and forth at least eleven times between three Government Departments - Lands and Survey, Agriculture, and Mines.

A State Forest Department was finally created in 1908 and La Gerche was appointed one of its founding Inspectors, along with WJ Code, and J Firth. The State Forests Department was, in 1918, to become the Forests Commission Victoria.

John La Gerche died on 18 November 1914 and was buried in the Ballarat Old Cemetery, with his wife Nora.

The last word here is perhaps best left to the historian Angela Taylor. In summarising La Gerche’s contribution to forest care and management she suggests that:

‘….his job made such impossible demands that at times his labours seemed almost Herculean. For John La Gerche was all that stood between a well-managed forest—one where healthy saplings were given the chance to thrive—and a denuded one. We might well ask how it was possible for a solitary forester to manage a State Forest in the public interest, given such severe constraints—government neglect of forestry, lack of resources, the demands of the mining industry, a permissive licensing system and a defiant popular rejection of forest authority? Yet, surprisingly, a good bailiff-forester could make a difference. What made the difference for the Ballarat–Creswick Forest was La Gerche’s high moral calibre, wise judgement, sound practical sense and dogged persistence. He managed the forest, in large part, by moral suasion…’ (pg. 7)