Control of the Sirex Wood Wasp

The Sirex Wood Wasp is an insect which attacks softwood timber species with disastrous effect – particularly Pinus radiata which is planted extensively in Victoria to supply timber for house construction. Originally from Northern Europe, the wasp was found in softwood plantations in New Zealand in the early 1900s.

After its detection in Tasmania in early 1952, Commonwealth authorities were concerned to try and eradicate it as early as possible, as they considered the extensive plantations of softwood on the Australian mainland  were at risk.

The presence of the insect in Victoria was confirmed on 20th of December 1961 in pine logs at a sawmill and which were traced to a small privately-owned plantation on a dairy farm near Woori Yallock, about 40 kms east of Melbourne. The Forests Commission (FCV) immediately started measures to eradicate it. Strict quarantine protocols were quickly introduced to curtail the movement of possible infested timber material form within the infested area.

A National Sirex Trust Fund was set up to provide resources for survey and eradication of the insect, and later for research and its control. The FCV was designated as the agent for survey and control operations on the ground with the CSIRO Division of Entomology to be the lead operator in research and biological control.

This survey and control operation was run by staff co-opted from FCV to the National Sirex Campaign. The survey section was headed by Mr Charles Irvine, the Commission's Chief Forest Biologist who controlled about 15 two-man teams which physically inspected all radiata pine trees within a zone centred around the initial infestation. Many young graduate foresters from the Victorian School of Forestry were among the early search teams. The presence of the insect was soon confirmed in commercial plantations in the Latrobe Valley of Western Gippsland.

On each discovery of the insect, measures were taken to destroy the infected material by burning. This destruction work was also carried out by FCV staff from the Division of Forest Protection who were seconded to the National Sirex Campaign. It was hoped that this initial phase would be able to eradicate the pest. Meanwhile research into the biology of the insect was increased with the aim of long-term control.

The search and destroy program continued for a number of years but, with the continuing detection of the insect further outside the known boundary, it was formally agreed by the National Sirex Committee to change to a biological control option. This option had been considered by the CSIRO for some years; they had been searching for parasitic insects in Europe, and breeding programs had been established in Hobart and Melbourne. These insects were released in heavily-infested plantations in the Latrobe Valley and Central Victoria. In addition, research was being carried out into the possibility of using parasitic nematodes as a form of control. Many FCV staff were involved in this work over a number of years. 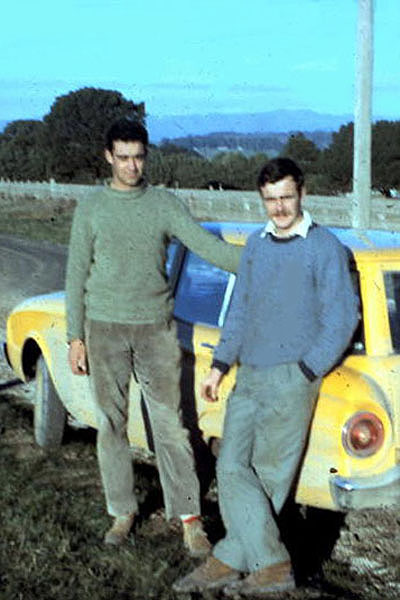 Mike Gardiner & Conrad Wood
on Sirex duty at Thorpdale in 1963.
Source: B Fry

From the early 1970s nematodes have been the recommended form of biological control. The nematode Deladenus sircidicola (recently renamed Beddingia siricidicola in honour of Dr Robin Bedding, a world-renowned authority on nematodes who worked with CSIRO in developing this control technique) has been the preferred option for control in South Australia, New South Wales and the Australian Capital Territory for many years.

A Story of Sirex noctilio
Assault on Sirex
Bulletin 29