This article is taken from "A Discussion Paper to Assist the Department of Conservation Forests and Lands Prepare A Submission to the (Timber Industry) Inquiry. DW Flinn, DJ McKittrick, RB Smith & KJ Wareing, July 1984

The commercially important mountain ash forests of the Central Highlands of Victoria provide habitats for at least two species of phasmatids (stick insects), one of which (Didymuria violescens) has potential for severe defoliation over large areas. Such defoliation often results in premature tree death. In the summer of 1960/61, infestation of phasmatids first appeared in stands near Powelltown, though stands in other parts of the Central Highlands were also attacked. As a result of this threat to the immature ash resource, detailed studies on the biology and epidemiology of phasmatids were undertaken. This work, which is reported by Neumann et al. (1977), led to the development of an effective and safe control strategy.

The life cycle of D. violescens in the mountain ash forests is predominantly biennial, though some progeny may pass through an annual cycle. Thus, 'peak' populations tend to alternate with 'trough' populations in successive years. This two year cycle of generations is due to the occurrence of diapause (a period of suspended development) in embryos of eggs incubating in forest litter. During diapause, the morphological and physiological development of embryos is temporarily arrested, both at an early nuclear stage and again at the almost fully developed pharate nymph stage. However, annual cycling of generations will be produced if for example diapause occurs only at the early nuclear stage. This coexistence of generations passing through life cycles of different duration implies that some viable eggs always remain in litter upon completion of hatching in any one year. This has implications in the development of a control strategy.

On hatching, the nymphs stagger across the forest litter and climb any vertical object in response to strong anti-gravity instincts. The nymphs must ascend to eucalypt foliage within 1-3 days of hatching to survive. The five nymphal instars and the adults then usually reside and feed in the crowns of eucalypts which they climbed, on hatching, although male adults may disperse.

While D. violescens has a high reproductive potential (eg in theory, 156 female reproductives could be produced by a fertilised female every two years), this is rarely realised under field conditions owing to mortality at all stages of the life cycle. However, under plague conditions that occur from time to time, rapid defoliation of eucalypt crowns will take place. Young nymphs feed on the soft, immature foliage whereas old nymphs and adults can feed on mature foliage. As a result, the outer periphery of host crowns is defoliated first. Neumann(1974) used frass rate (dry weight of faeces produced per insect per unit time) as a measure of food intake or leaf consumption of nymphs and adults. He found that although frass rate increased with each successive instar, the more significant increases occurred beyond the third instar. These results are important, because control programs should be undertaken before the appearance of the more destructive growth stages. 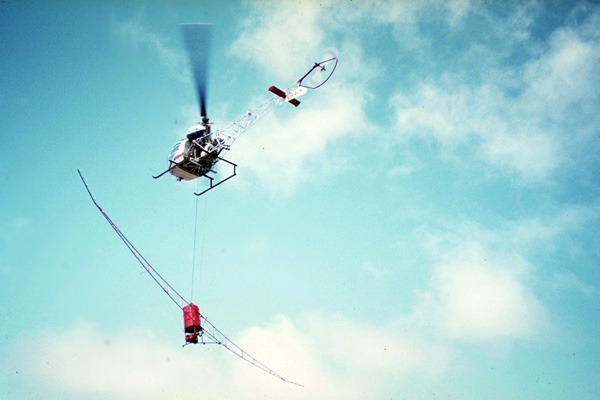 The policy of the Department has been to reduce large, damaging phasmatid populations to low levels as soon as practicable after detection in ash forests. This requires execution of an effective control strategy that prevents both economically serious defoliation and the emergence of high levels of progeny from current generations of the pest. To this end, and taking the biology of the insect into account, it is necessary to be able to predict phasmatid populations well in advance. Early predictions of insect populations are based on examination of litter samples to estimate the population density of viable eggs. A control program is only undertaken when a damaging (critical) population is predicted.

The only feasible control method in the moist ash-type forests is aerial application of a suitable insecticide. Malathion has so far been used for this purpose in Victoria. As noted by Neumann et al. (1977), malathion has many toxicological and environmental advantages over alternative pesticides.

Spraying is undertaken when the less destructive immature stages of the insect are present (generally January to early February depending on elevation and seasonal climatic conditions). Excellent results have been obtained under these conditions. Strict prescriptions are enforced during spraying operations. A great deal of research effort has been directed at the effect of spraying with malathion on non-target insects. While short-term reductions in some orders of non-target insects have been detected, the overall impact can best be described as minor.

The detailed work of Neumann et al. (1977) has therefore enabled potentially destructive phasmatid populations in the valuable ash-type forests of Victoria to be predicted in advance of any defoliation and tree mortality, and to be controlled by a relatively safe and cheap method. As an example, Runnalls and McCormick (1981) report results of egg surveys in 1980 showing that four separate areas supporting alpine ash in the Bogong locality and one area suporting largely mixed species forest in the Mt Wills locality of north east Victoria carried critical egg densities. They recommended treatment of the alpine ash forests by aerial spraying in the summer/autumn of 1980/81, and low intensity burning of the litter between May 1981 and September 1982 for the mixed species forest. This latter control method, that aims to destroy the eggs before hatching, is not appropriate to high elevation mountain forests. Between 1964 and 1983, over 21,000 ha of high quality ash forests in the Central Highlands and north east Victoria have been successfully treated by aerial spraying with malathion. This control strategy should continue to be used whenever plague populations are predicted in the mountain forests.