As part of the celebrations for the Melbourne Centennial International Exhibition of 1888-89, the organisers established a fund “for the purpose of obtaining a series of photographs of the highest known trees together with reliable measurements”.

The efforts to find the trees are described by Peter McHugh in his monographs about tall and big trees in ‘Forests and Bushfire History of Victoria’.

Photographer and civil engineer John Duncan Peirce was commissioned in the winter of 1888 to photograph and measure what trees he could find before the Exhibition ended on 31 January 1889. Peirce was able to find and record only six suitable trees in the time. Photographs of these and one other tree, all of them identified as Eucalyptus amygdalina regnans, were consolidated later in 1889 in an album titled ‘Giant Trees of Victoria’.

The seventh tree included in the album was called ‘The Baron’. As described in McHugh’s monograph, nurseryman David Boyle claimed that, in 1879, he had measured a tree in Sassafras Gully in the Dandenong Ranges, 31 miles from Melbourne, at 522 feet tall with a girth of 114 feet, and which he had named ‘The Baron’ in homage to his friend Baron Ferdinand von Mueller. On 8 January 1889 Boyle remeasured, and Nicholas Caire photographed, ‘The Baron’ and submitted the record as a last-minute entry to the Centennial Exhibition. The tree had reduced in height to 466 feet since being measured 10 years previously. Unfortunately, as noted by McHugh, no copies of Caire’s photograph appear to have survived.

Later in 1889 the Conservator of Forests, George Samuel Perrin, certified surveyor, Mr H. W. Fuller as well as David Boyle undertook an official measurement of the tree identified as ‘The Baron’, and John Duncan Peirce photographed it. However, the tree they measured was found to be only 219 feet 9 inches tall. More controversially, its girth was only 48 feet 6 inches. 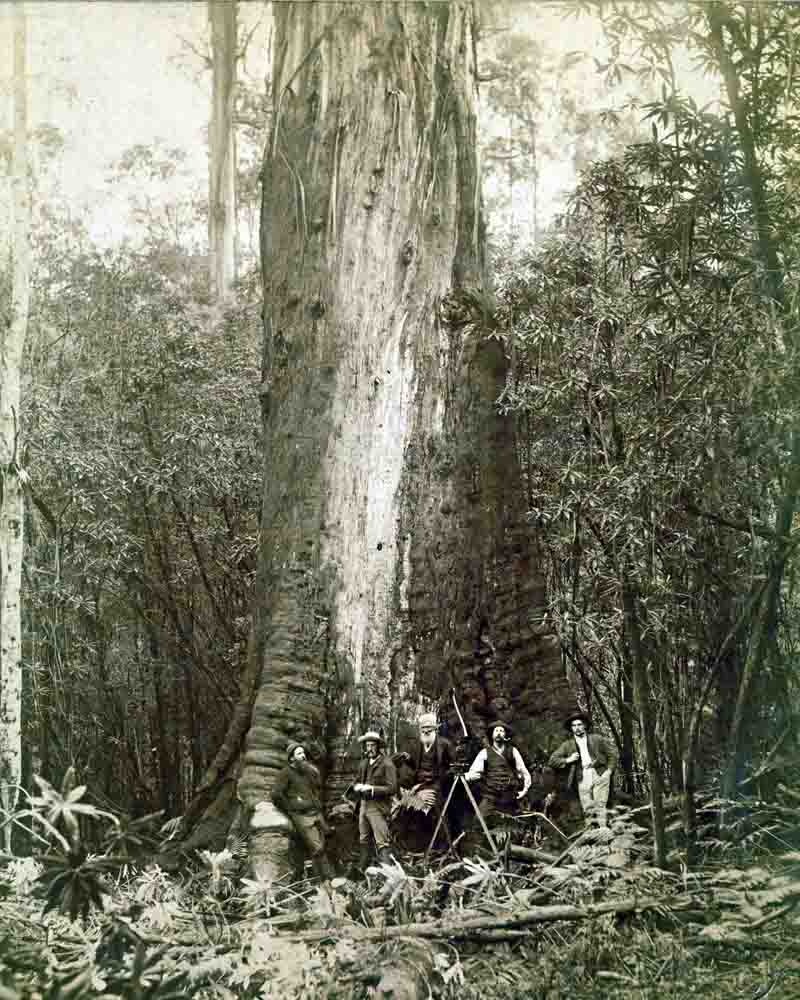 Campbell’s references to the district of “Gippsland” with respect to ‘The Baron’ could suggest that the tree he photographed was in that region.

The photograph of ‘The Baron’ in this article is copied from an original print issued from the studio of John Duncan Peirce following the 1889 expedition to establish the official measurement of the tree. On the back of the photograph is the signature, in ink, “Geo S. Perrin F.L.S., Conservator of Forests”, and some text in lead pencil followed by the initials “A. W. H.” – the initials of Alfred William Howitt.

Of extreme interest is what is written, viz:

The Parish of Ellinging incorporates the Ada River and adjacent Big Creek, both being tributaries of the Latrobe River. The parish is in the County of Buln Buln in West Gippsland; confirming the “Gippsland” location of ‘The Baron’ that AJ Campbell appeared to suggest in ‘Glimpses of Australia’. The area is some 65 miles from Melbourne.

There remains the possibility that this was Boyle’s original tree but with measurements that were exaggerated for the purposes of the Exhibition; and he may have originally recorded the location as ‘in a sassafras gully in the Dandenong Ranges’ with a mistaken estimation of the distance from Melbourne.

While the differences in measurements of height can be attributed in part to the difficulty in measuring such great heights in scrubby country, the difference in girth is less understandable. Is it possible that the tree originally claimed by Boyle did not exist or could not be found and that, in order to continue to honour Baron Ferdinand von Mueller, who was still alive at the time, the party selected another tree?

Intriguingly, under his subsequent photograph of ‘The Baron’ (in ‘Glimpses of Australia - An album of photographic gems’, published in 1897) AJ Campbell wrote:

“The Baron”. A Noted Tall Tree. – Gippsland, a Victorian mountain district, is noted for the great size attained by its forest trees, which rival the big trees of California as the greatest trees known to the world. Out in the Gippsland gullies, and on the hillsides, these forest giants tower to record heights .... In the Dandenong Ranges, trees 420 feet high are said to have been measured, while a fallen tree at Healesville was 480 feet ... It is the mountain ash or peppermint that attains these gigantic proportions in the ravines of Gippsland. The tree here depicted is a well-known example of Victoria’s towering vegetation, and it appears a perfect giant amidst the trees of ordinary size near, which it dwarfs till they seem pigmies. 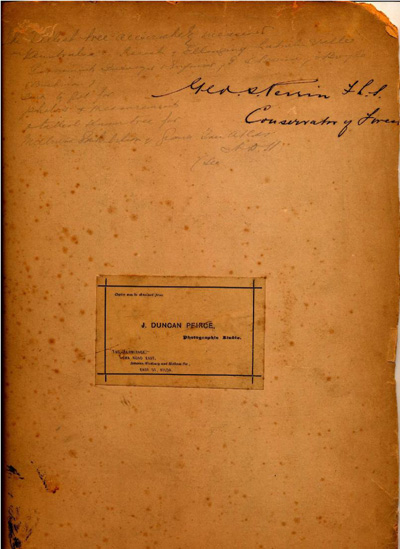 "The Baron"
The back of the photograph
1889
Source: JA McKinty

The location of ‘The Baron’ as being in ‘Sassafras Gully in the Dandenong Ranges’ persisted on subsequent reprints of the photographs, most notably in the 1889 album of photographs ‘Giant Trees of Victoria’, and the State Forest Department’s Annual Report of 1910-11. In both cases this could well have been a simple matter of ‘copy/paste’ the information instead of checking all the data.

As McHugh suggested, at some time ‘The Baron’ either fell down, was cut down or was burnt down in bushfires, because its existence faded from the records.

So .... The search to re-find ‘The Baron’ should probably have concentrated in the Ada River catchment.

Or I could be just barking up the wrong tree.