The Murrindindi Forest is bounded by the Acheron River in the east, the Yea River in the west and the Goulburn River in the north with the Great Dividing Range and the Black Range forming its backbone. The Toolangi-Black Range Forest Map indicates its extent.

Tall, dense mountain forests grow at the higher elevations where the climate is cool and wet. These comprise mainly regrowth forests of mountain ash with some stands of shining gum, mountain grey gum and messmate. A variety of other tree species occur on the foothills and merge with the mountain ash – principally messmate, manna gum and mountain grey gum. Drier locations support red and brown stringybarks and broadleaf peppermint.

In reviewing the many early records of Aboriginal use of the area, Griffiths 1 suggested that “The forests of ash were probably not permanently occupied by Aborigines but visited seasonally – briefly in winter for lyrebirds and principally in summer by hunting and foraging parties. Campsites would have been used along the length of major rivers that penetrated the highlands, such as the Yarra and Big Rivers. Aborigines probably did burn the margins of the wet sclerophyll forests and may have maintained clearings and pathways in forest areas (particularly along ridgetops), but it seems unlikely that they systematically burnt the mountain forests in the way they did the drier forests and plains.” 1

Gammage 2 refers to ‘templates’ to describe how Aborigines managed the land with fire to access its resources. He suggests that these ‘templates’ could explain pre-European plant patterns that were otherwise puzzling, particularly open grassy areas within forests where it would be expected that the trees and understory would have prevailed. What was possibly such an area was still evident near the upper Yellowdindi River in the early 1970s - on a low spur surrounded by mountain ash forest. There was no indication of trees having existed on the spur although the undergrowth had been gradually encroaching from the edges and it was over-run by bracken. This site (since seeded with mountain ash) could arguably have once been one of the Aboriginal ‘templates’ described by Gammage.

“When Europeans first entered the tall forests, their testimony varied as to its density because of the variety and localised nature of fire regimes. In places they recalled riding by horse through scant undergrowth: in others they had to fight through thick scrub to make a pathway. Where they did find an open forest floor, it was not due to regular burning but to the long absence of fire.” 1

“The magnificent mountain ash forests that exist today are also the products of history with a distinctive ecology, and they resist some of the generalisations about rainforests on the one hand, and dry forests on the other. They have little resistance to fire. Their regeneration is precarious. They were not burnt lightly and regularly by Aborigines. Holocaust fires are endemic. Vast areas of mountain ash were cleared by settlers, and other areas were denuded by repeated fire.” 1

Mountain ash (Eucalyptus regnans) was, until 1882, believed to be a member of the Eucalyptus amygdalina, or black peppermint group. Indeed, the ‘Economic Woods of Victoria’, a catalogue printed in 1894, still included mountain ash with Eucalyptus amygdalina. At that time the hard, close-grained, fissile timber was known to be “well adapted for shingles, rails, house-building, for the keelson and planking of ships, and other purposes.” The inner bark was found suitable for “the preparation of all kinds of coarser paper.” [Economic Woods of Victoria]  Other uses included palings, pickets, lining, coach and carriage bodies, cooperage, tool handles and railway stock.

Although mountain ash timber split well, it warped and collapsed after sawing and as it dried. During the 1920s, techniques were developed for the milling, drying and reconditioning (seasoning) of ash timber. Accordingly, in 1925, Ewart recorded that mountain ash was regarded as “one of the most useful hardwoods, equal to the best ash, oak, or hickory for flooring, furniture, beams, planks, shingles, and weatherboards.” 3

“At first, the bulk of Victoria’s sawn timber was supplied by imports, some from Launceston and Sydney, most from the western coast of North America. Goldmining created an intense demand for local supplies of timber, and the forests near mining towns were the first to be systematically exploited.” 1

“Sawmills were established in the 1850s in the ranges north and east of Melbourne to cater for the city’s rapid increase of population and demand for building materials. John Wood Bielby built possibly the earliest sawmill in the central mountain forests at Fern Tree Gully in the early 1850s, and he found that timber shipped from Tasmania could be sold far more cheaply in Melbourne than timber brought by dray from the Dandenongs.” 1

The major phase of exploitation of the mountain forests for their timber resources began in the 1890s as the forests adjacent to mining operations were denuded to supply timber and charcoal to the nearby mines. “The exhaustion of the mixed species Wombat Forest by the end of the century (it was declared ‘a ruined forest’) turned the eyes of the sawmillers eastward and into the mountains.” 1 Many of the sawmillers that set up in the Murrindindi Forest at this time had moved from the Wombat Forest. After the gold rushes, forest destruction engendered by early pastoralists and the mining community became characteristic of the settlement period – clearing of the forest was often a condition of a lease. Not confined to the squatters and settlers, exploitation of the forests was also common among timber splitters and sawmillers. The apparent unlimited timber resources of the State led to their essentially uncontrolled exploitation under a laissez-faire licencing system.

The lack of control over timber harvesting led to incomplete use of the wood resource. Under the licensing system it was customary to take only the prime parts of felled trees. In particular, when splitting was being carried out, up to three quarters of the trunk was left untouched. If a tree did not split easily it was left to rot and another felled, often to share the same fate as the ﬁrst. 4

The splitters were the earliest exploiters of the ash forests. “Ash timbers were eagerly sought for palings and shingles because they split so easily, and many of the forest giants fell to paling splitters. A lone splitter could wreak considerable havoc.” In 1874 “it was estimated that for each tree used by a splitter, seven others were felled and abandoned. These men were said to have ‘epicurean tastes’.” 1

“The geography of the Murrindindi Forest dictated four major patterns of utilisation and transport. The towns of Yea in the north and Healesville in the south acted as the focal points of the timber industry by supplying capital, labour and transport. The Yea sawmillers operated out of the Cheviot railway station and moved through the forest in a south-easterly direction for twenty miles to the crest of the Black Range overlooking Buxton. The Healesville millers moved in a northerly direction for twenty miles to the top of the Divide overlooking the Murrindindi River until they met the Yea sawmillers’ leases. On the south-western flank were the Toolangi millers who worked their way up the Divide from Yarra Glen. All of the above three areas were exploited from the 1890s to the 1940s using timber tramways as the main form of transport. Road improvements during the 1920s and 1930s between Healesville and Alexandra opened up the Acheron Valley and enabled the eastern slopes of the Black Range to be made available for timber extraction. These millers moved up the face of the range until meeting with those Yea sawmills situated on the crest.” 5

“At that time sawmills were placed on the source of log supply due to the contemporary state of log-harvesting techniques and the economic advantage of transporting sawn timber rather than logs out of the forest. Therefore the Murrindindi Ranges were dotted with sawmills and accompanying settlements, connected to the outside world only through rough tracks or narrow tramlines.” 5

This map, derived from Haughton’s book, indicates the locations of almost 90 sawmills and associated tramlines that had been established in the Murrindindi Forest at one time or another. Many of the mills were small and relatively short-lived, being established to produce palings, fence posts and housing materials. 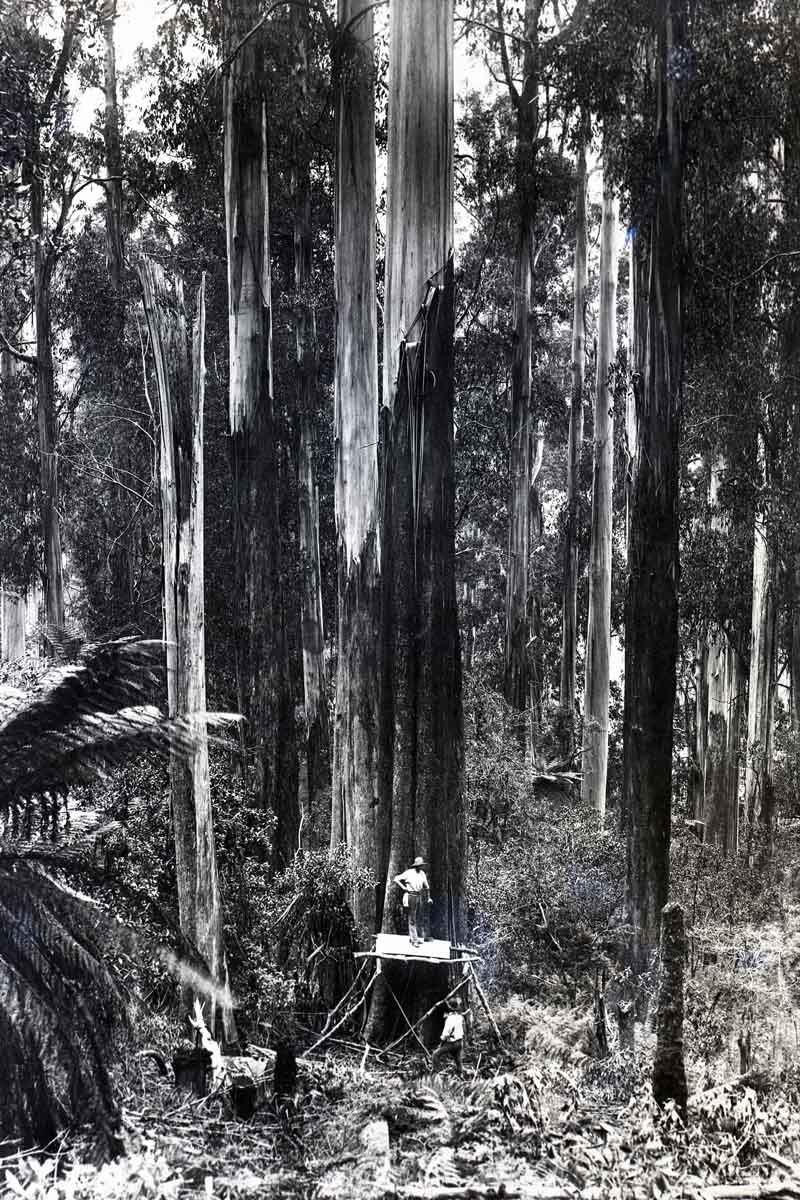 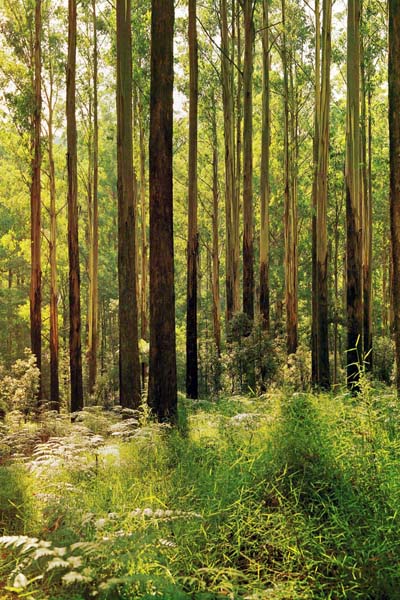 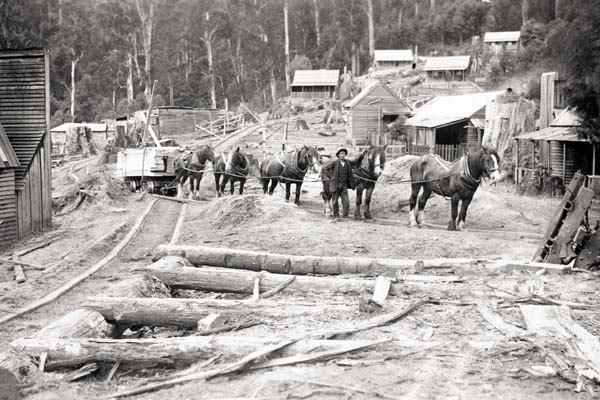 “The technical level of sawmilling equipment and logging practices in this forest ran the entire range from crude, two-man paling mills to a large-scale electrically-powered seasoning works. Steam-driven plant was almost exclusively used although two water-powered mills were successfully employed. In addition, the forest was exploited by paling splitters, firewood cutters and eucalypt distillers.” 5

“In the case of sawmillers, it was a common occurrence for licences to be issued to several rival sawmillers whose areas for wood extraction were grouped within a few kilometres of each other. The millers attempted to secure a monopoly of the area in which their plants were erected. To achieve this, trees were felled in quantities far in excess of the licensees’ own requirements, and felled across tracks and gullies to block access to the hauling teams of the rival mills. This wasteful exploitation … resulted in the loss of much valuable timber, which when it became dry, added fuel to the bush ﬁres.” 4

The Forests Commission had undertaken departmental salvage operations in some of the fire-killed ash following fires in the Murrindindi River valley in 1919; the trees were felled and left in situ for preservation. Much of this timber was milled between 1924 and 1926. Following the 1939 fires, the Commission set in motion an extensive timber salvage program underpinned by a major road construction project from a base at Kalatha camp. Wartime and the post-war construction boom expanded the market and accelerated the development of the roading system, and provided the impetus for harvesting in the more remote stands of lower quality.

Also following the 1939 fires, the sawmills were moved out of the forest due to fire safety requirements, improvements in log-harvesting techniques and the road transport of logs and sawn timber, and the industry’s need to overcome labour recruitment difficulties, poor working conditions and social problems caused by siting mills in isolation deep in the forest. 5

Between 1945 and 1948 the Murrindindi Forest was one of the largest timber-production areas in Victoria, with the peak being reached during 1948/49. By then, the forest had been meeting the bulk of Victoria's sawn timber requirements for more than half a century. Since that time, with the exhaustion of saw logs and pulp logs, the area’s milling industry declined, gradually at first and, after 1955, rapidly, with 1960 seeing the virtual cessation of supplies from the region. Some idea of the economic importance of these forests can be appreciated from the statistic that substantially greater than one thousand million super feet HLV of sawn timber were drawn from the Yea and Murrindindi River basins between 1940 and 1960. This would represent a market value in 2020 of some $756,000,000.

With the decline in the availability of timber from the area, by 1960 the principal utilisation practices were directed towards stand improvement by:

The felled material from the thinning operations produced small mill and case logs as well as pulpwood for the manufacture of packaging paper and cardboard.

In the 1970s the focus remained on thinning of advanced regrowth and the salvage of any timber and pulpwood from understocked areas. The salvage work was followed by site preparation involving the removal of bracken and scrub growth then re-seeding the area with mountain ash. Some of the better-quality timber at this time was supplied to a veneer producer and a garden trellis manufacturer.

By the 1980s, with the extensive mountain ash regrowth forests approaching maturity, sawn timber production was being anticipated to again become a major activity.