This article was written in February 1970, and it comes from the files of what was then the FCV's Upper Yarra Forest District, based at Powelltown.
This is probably a photo from 1912 of Mountain Ash near Warbuton.
(See this gallery for more information.)

The virgin forests of the Upper Yarra Valley have yielded a substantial proportion of Victoria's sawn timber for over half a century. The whole area is densely timbered and the forests have been intensively cut-over, and repeatedly and severely damaged by fire.

Early sawmilling operations in Victoria were concentrated in the more easily worked out and accessible forests of the north and north-central zones, particularly those in the vicinity of the principal goldfields. It was not until the early years of the present century that attention was turned to the mountain forest as a source of building timber - forests of the Upper Yarra Valley being among the first to be exploited. Early sawmills were of a steam-powered type and fed by a system of wooden or steel tramways. Logging generally was by bullocks or horses, with winch logging in the steeper of country. Sawmills were situated within the forest and the sawn timber exported by tramway to railhead at Yarra Junction and Warburton. Haulage was by horse or steam locomotive.

Powelltown eventually became established as a major sawmilling centre, taking its name from the Victorian Powell Wood Process Company which constructed a mill and seasoning kilns in 1912 to cut Mountain Ash for railway sleepers, using a "powellising" preservative treatment. These works were later taken over by the Victorian Hardwood Company and a steel tram line linking Powelltown with the main highway at Yarra Junction, 11 miles distant, was constructed. This was then extended as a log haulage line into the forest in the headwaters of the Little Yarra and Latrobe Rivers. Until about 1944, when road haulage and tractor logging were developed, log transport continued to be by tramline using "Shay" type steam locomotives, and stump to tramline logging operations by steam winches, using both high spar and ground snigging methods. Other sawmills became established in the district, the sawn timber being transported by the Hardwood Company over its tramway system on a freight basis. Over the same period, mills operating in the valley of the River Yarra proper transported the sawn timber on independent tramways to railhead.

In 1926, a major forest fire swept through the district, resulting in serious loss of life and the destruction of sawmills, tramways and extensive areas of Mountain Ash forest. Many mills were rebuilt and operated on fire-killed and remaining pockets of green timber. Prolific regeneration became established. Further destructive fires occurred in 1932, followed by the devastating fires in 1939 which caused tremendous havoc throughout the State including the forests of this district.

However, "parts of the Ada were missed by the 1939 fires, and it was in those missed areas that Murray Cunningham did his PhD research work in 1950’s. The last of the Ada was being logged in 1959, and we did a regen burn there in April 1959. (Arthur Webb, June 2021)." At least some of the sawlogs coming from this area were very large, as two of the photos in this article illustrate. 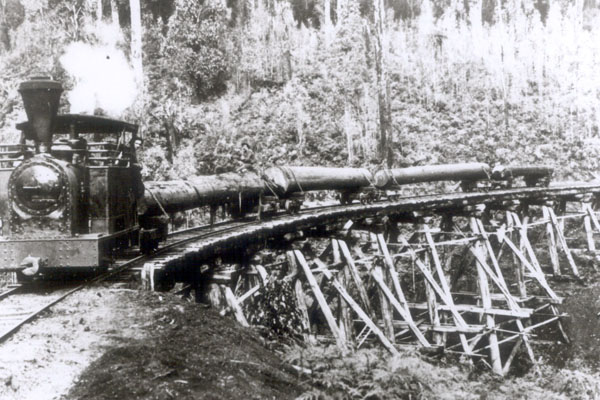 The "Coffee Pot" (Kerr Stuart No. 643) on the big bridge east of Powelltown (see Arsenic and Molasses p35) : Logs heading to the sawmill
About 1920
Source: FCRPA 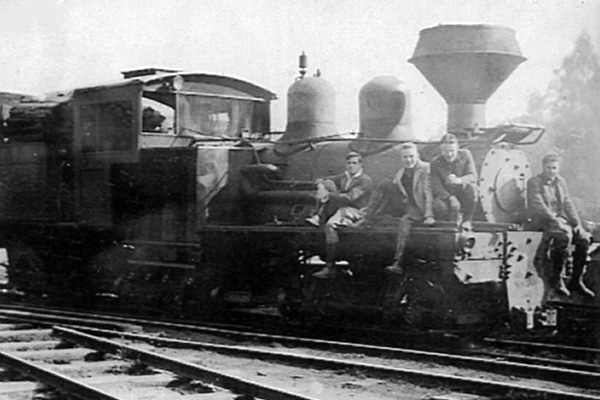 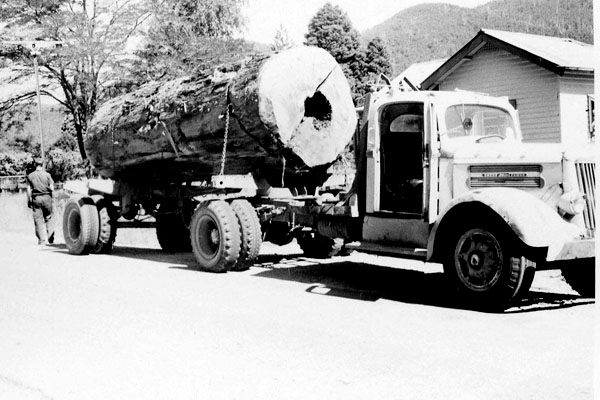 Log truck, Main Rd, Powelltown. Logs like these were coming from areas unburnt in the 1939 fires within the Ada River catchment.
About 1959
Photo: JD Gillespie, Source: S Gillespie 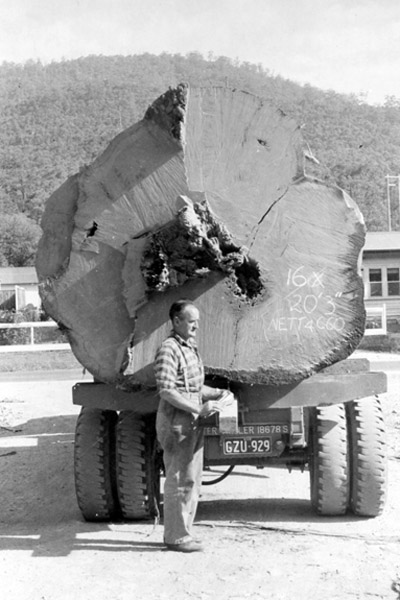 Log truck, Main Rd, Powelltown.
In the photo is "Tim" Timoney who undertook storeman and log checking duties for the FCV in Powelltown
About 1959
Photo: JD Gillespie, Source: S Gillespie 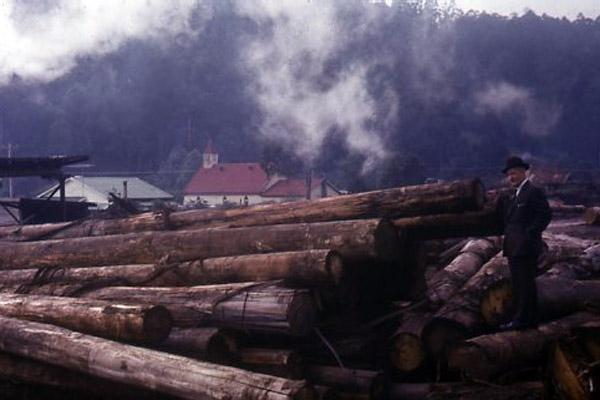