Timber harvesting, with sawmills located in the forest, was probably occurring before 1870, and by the 1890's a major sawmilling and seasoning industry was established based on the town of Wandong. The company, the Australian Seasoned Timber Company, (Fig.1) operated tramlines and sawmills in the forest as did other separate concerns.

The quotes below are from an article about these early years by John Slater, in the December 1970 VSFA Newsletter.

"Early sawmilling is reputed to have commenced in the Mt. Disappointment forest in the year 1870 when Mr. Abe Neil established a mill on Strath Creek. This was a forerunner of a number of mills to be operated in the forest by the Neil family up until 1939, when their sawmill was transferred to Broadford."

"Numerous other mills operated on different locations and at different times within the forest between 1870 and 1939, but in the 100 years of sawmilling history of the Broadford forests there has been no sawmilling venture, or is there likely to be again, to compare with that of the Australian Seasoned Timber Company."

"The Company which ran between 1880 and 1902 was said to be the largest sawmilling and timber processing industry in the Southern Hemisphere at the time, running a seasoning and joinery works at Wandong and over the period, four sawmills in the forest supplying timber directly to the works. The largest of these mills was the renowned Comet (which was linked with Wandong by a steel railed tramline eleven miles in length.)" (Fig.2)

"Along the line from the Comet were the other mills, the Planet, (Fig. 3) the Planet No.2 and the Bump."

"At the height of its activity the Company employed 420 men in the area."

"A magnificent high trestle bridge, a quarter of a mile long, 52 feet high and with 10 foot decking, complete with hand railing and other trimmings was constructed over a deep gully for the Company by Lee Brothers, specialist bridge builders in Victoria of the time." (Fig. 4)

"An interesting feature of milling during these early days was that the large messmate logs of the virgin forest were sought after as seasoning and joinery timbers in preference to mountain ash, which was not accepted as suitable for these purposes."

Ribbentrop (then the Inspector-General of Forests to the Government of India) visited this forest in 1896 and said:

"Near Wandong I visited some forests which serve a couple of sawmills owned by the Australian Seasoned Timber Company. Here again the work is carried on, so far as the forest is concerned, without any pre-considered plan. The State has no security that the forest will not be over-worked and finally ruined, and the company none as regards the permanency of supply."

If you have a particular interest in tramlines you should look at this gallery. 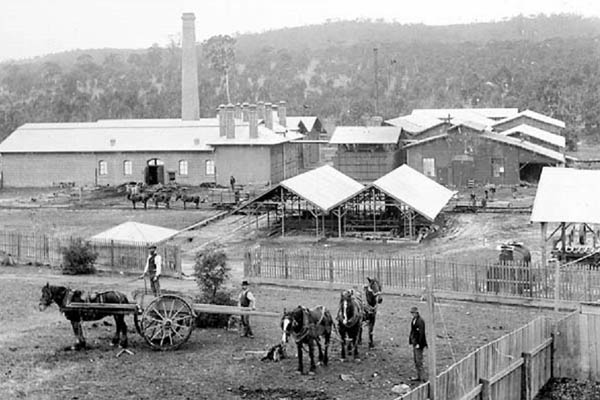 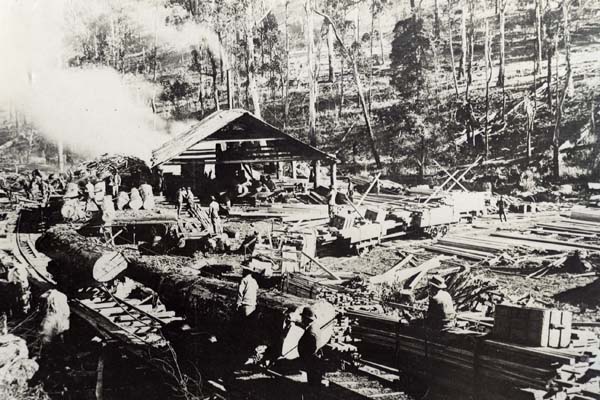