History of Timber Production From the Lower Murray

While Aboriginal demands on the forests and woodlands of the region were for shelter, implements and food, early European settlers sought local building materials and fuelwood. This meant when the intensity of settlement and the development of infrastructure increases, so too did the demand for timbers.

The tough, strong wood of river red gum is durable in the ground, resistant to white ants and borers and, when mature, fairly resistant to ship-worm and thus has a wide range of uses. For this reason, large quantities of round river red gum piles were used to underpin road and rail bridges around the state and the wharves and piers of Melbourne and Geelong’s harbour infrastructure. River red gum was used for house stumps, road paving blocks, mining and fencing timbers and culverts, and to build the river steamers and barges that plied the Murray. Red gum poles were used to carry telegraph lines from the early 1900s and power transmission lines from about 1920. While used mostly for the south-eastern Australia’s burgeoning infrastructure, significant volumes of the heavy timbers and railway sleepers were also exported, particularly to India.

During the 19th century much of the timber cut from the forests was hauled to the river’s edge by bullock or horse teams (and, from the 1920s, by motor lorry) and then lashed to special barges and towed by paddle steamers to sawmills. Pending the completion of the system of locks and weirs, river transport was restricted to between July and December when the river was navigable. In places, canals, called ‘pontoon cuts’, were constructed between shallow creeks so that logs could be floated out to the river bank on pontoons. Evidence of such a canal remains—known as the ‘steamer track’ through Barmah Lakes to Cutting Creek. Extension of the rail system caused considerable decline in river transport by the 1900s.

The first sawmill based on river red gum timbers was established at Moama in 1856; Arbuthnot Sawmills was established at Koondrook in 1890 and is still operating. Of the 14 sawmills operating in the Barmah–Gunbower region at that time, 12 were located in Victoria mostly on the riverbank to take advantage of wharf facilities. Other mills were located at Swan Hill and Mildura. Echuca, with its port facilities and rail link to Melbourne, became the main centre for timber production in the central Murray region.

As well as being produced at the sawmills, railway sleepers were hewn with broadaxes ‘at the stump’ (in the forest). Records show that from 1372 sleepers produced in 1898, output reached a peak of 190,000 pieces in the early 1930s. Although hewing was economically wasteful, the Railways Department preferred hewn to sawn sleepers, probably because hewers tended to seek out straight-grained logs, which were easier to hew, and straight-grained timbers are more predictable in use.

Although official figures were not regularly published before 1890, the average annual consumption of Victorian river red gum in the late 1870s was said to total 48,000 cubic metres, of which 30,000 cubic metres was sawn timber. The ready access from the river meant that the forests were heavily exploited. Cutting was uncontrolled, selective and extremely wasteful. Even when the forests were flooded, cutting continued; the fellers stood on specially designed punts anchored on either side of the tree to be felled (resulting in significant waste as stumps up to three metres high were occasionally left).

A Royal Commission on Forests established in 1897 reported that, if cutting of the river red gum forests was allowed to continue at the-then existing rate, the remaining forests would be exhausted within five years. It also saw a need for thinning of large areas of heavily-stocked (1870–1880s) regrowth. One outcome of the Commission was to break the monopoly of the portable steam-powered sawmills producing sawn sleepers and to permit sleeper-hewers into the forest to cut ‘old and hollow’ logs rejected by the sawmillers. 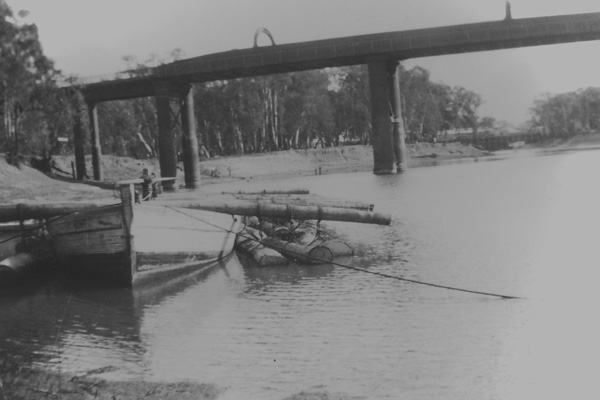 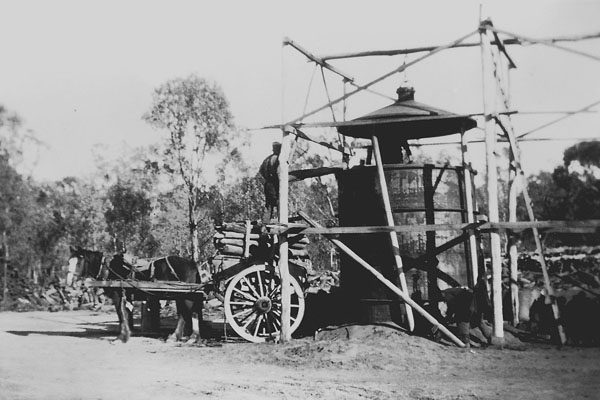 During the 1890–1900 depression, gangs of men were employed after harvesting to thin the 1870–1880 regrowth and ringbark competing larger trees that were unsuitable for sawlogs or sleepers. The aim of this work was to concentrate subsequent growth onto sawlog-quality trees. By 1928, more than 16,800 ha of river red gum forest had been thinned or ringbarked. Similar silvicultural treatments were continued throughout the 1930–1940 depression because forest treatment could be organised such that a high proportion of the money spent on relief work went in actual wages and a small proportion in the cost of tools or materials.

Production from the forests increased during the Second World War when wood was also cut for the production of charcoal for use in such applications as the gas producers on vehicles and gas masks and, in 1941, some 50–60 charcoal retorts were operating in the Barmah Forest. The post-war years saw a sharp increase in demand for posts and vine-trellis timbers for the irrigation areas and for building timbers for the soldier-settlement schemes.  Further, a shortage of coal and fuel wood continued for Melbourne homes and industry after the War so, from 1949 for some years, contract and day-labour workers produced 1-foot blocks of firewood in the Barmah Forest District. This was stacked on the banks of the Murray River then transported by barge to Echuca from where it was loaded on to rail for shipment to Melbourne.  A firewood mill also operated at Picola between 1946 and 1950 and sent firewood to Melbourne by rail.

Other species associated with the river red gum forests - the riverine box species and Murray cypress pine - were also utilised, mainly for small poles, sleepers and fencing materials. Black box woodlands in the west supplied the developing irrigated horticultural areas with several hundred thousand pieces of fencing and vine trellis timbers each year. Extensive areas of black box woodland were felled on the upper river terraces in the vicinity of Cullulleraine, for instance, to feed the boiler of the Millewa irrigation system; little evidence of these woodlands remains. Black box was also useful for carriage building, furniture and house building.  Being non-fissile, grey box was used for [bridge and wharf] decking, tool handles, carriage shafts and mauls. Murray pine timber is resistant to insects and easily worked and polished. It was used for flooring, wall linings, weatherboards and other joinery in buildings.