In the early 1950's the FCV stepped up its efforts to extinguish all unplanned fires in State forests by taking aggressive action against fires in remote and inaccessible forests in the east of the State. FCV's policy was to do everything reasonable to reduce the time between when a fire started and the initial attack. Fire crews were trained and equipped for "dry" fire fighting and expected to walk - sometimes long distances - to fires.

At that time most forest road construction was associated with the timber industry and was concentrated in the headwaters of the Goulburn and Macalister river systems, and some in East Gippsland the Northeast. There was only a few "Jeep" tracks extending beyond these roads and the mining tracks of a past era were overgrown and not usable by motor vehicles. FCV's strategy including extending the system of Jeep tracks into unroaded areas to reduce walking time but, even so, fire crews often walked several hours and camped overnight before a fire was reached.

A problem was how to provision these crews with food and water. They were expected to carry enough provisions to survive 24 hours. Beyond that time provisions had to be got to the crews by some means or other. Sometimes this was a bulldozer, a packhorse or another fire crew carrying extra provisions. Some ingenious attempts were made to drop food and drinking water from light aircraft. Block-ice wrapped in hessian solved the drinking water problem. Canned and other foods invariably burst on impact and/or drafted far off target.

ED (Ted) Gill, Chief, Division of Forest Protection, returned from a fire study tour of North America in 1963 and drew for me a sketch of a dropping box he had seen. I was Fire Research Officer at the time. I got some large sheets of cardboard and creased, folded and taped them to resemble the sketch. I put a one-gallon tin of water in each and dropped them from a Cessna aircraft on Moorabbin airport. The result indicated three things necessary for success, viz a cushion (honey-comb cardboard or something similar) in the bottom of the box, a large 'angle of attack' of the fins and that they dropped about 200 feet before the spinning action stablilized their direction and minimized the rate of descent. I made more boxes and, using typical foodstuffs needed by fire crews, made further trials using Neil McInnes's Cessna on his private airstrip at Tinamba.

When I was satisfied with the design, method of packing and best method of delivery out of the aircraft I arranged for a Melbourne company to cut and crease the boxes to specification and to deliver them ready for assembly. They were given Stores code for ordering and an illustrated instruction was produced to assist staff assemble, pack and drop them.

They were frequently used operationally in the next decade mostly from aircraft based at Tinamba, Tallangatta and Mansfield. The need for air drops declined as the jeep track system extended and helicopters became available. 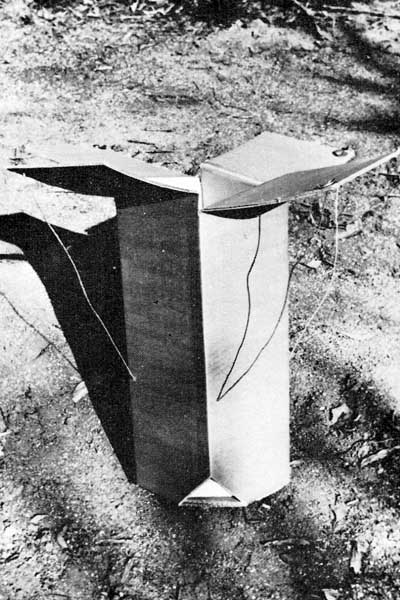