This article is taken from "A Discussion Paper to Assist the Department of Conservation Forests and Lands Prepare A Submission to the (Timber Industry) Inquiry. DW Flinn, DJ McKittrick, RB Smith & KJ Wareing, July 1984

The silvical requirements for the effective regeneration of alpine ash are detailed in the Victorian work of Grose (1960) and related publications. Flowering occurs just over two years after bud initiation, and seeds mature about two years later when natural seed cast commences. Shedding can persist for up to four years. Thus, although good seed yearsare irregular and infrequent, some seeds are shed in most years. Also, stands on exposed aspects may produce about twice the seed than that from equivalent stands on sheltered aspects. The peak of free seed fall is February to April.

Most seeds shed in capsules are harvested by insects or become non-viable within the capsules so that regeneration must come largely from free seed. Between 50 and 75% of the free seed may be harvested by insects, and some germinates in autumn but the germinants die during winter, so that only 15 to 34% of the total free seed fall is available for spring germination. Free seeds that overwinter and fail to germinate in the spring become non-viable. Therefore, no store of seeds accumulates in the soil or litter beyond 9 to 12 months after seed fall.

Most seeds of alpine ash have a primary dormancy that can be either strengthened under certain conditions or effectively broken by stratification. The degree of after-ripening achieved by stratification determines the extent to which temperature controls germination energy and capacity. A secondary dormancy may be induced in after-ripened seeds exposed to conditions (temperature and/or moisture) unfavourable for germination.

Given these rather complex seed characteristics, seed protection is of crucial importance to successful germination. Friable surfaces such as those provided by slash fires or disturbance of the mineral soil during harvesting are most favourable for germination while compacted soil or grass and litter-covered seedbeds are entirely unsuitable.

Losses of spring germinants in the cotyledon and two-leaf stages are high irrespective of seedbed type. These occur due to exposure of roots by water-wash and frost heave, decapitation by ice action, and lethal (high) temperatures at the soil-air interface. Sufficient seedlings however usually survive through to the following winter on bare soil and ashbed seedbeds, but winter losses can be substantial due primarily to prolonged saturation of the inter-cellular spaces of the leaves with water from melted snow. Grose (1961) observed that the first few pairs of leaves are horizontal and dorsiventral (upper and lower sides structurally different) whereas subsequent leaves hang vertically and are more glaucous. These latter leaves shed water more readily. 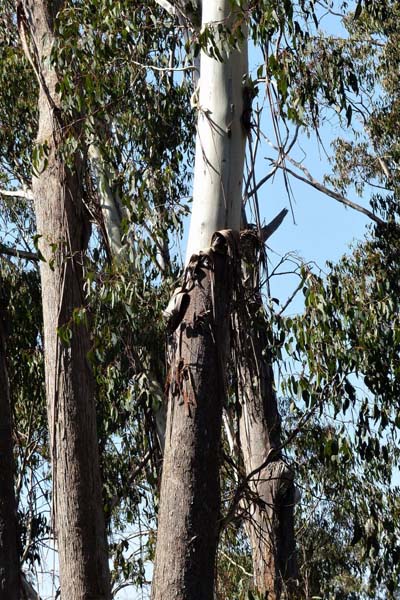 The ability of seedlings to over-winter under snow is therefore largely governed by the interacting effects of seedbed and site exposure, and this interaction is of profound importance in the formulation of regeneration systems. Seedlings that have grown for six months on a recent ashbed are taller and have more leaves at the less vulnerable (to water injection) stage than the same-aged seedlings on bare soil. In addition, bare soil seedlings that develop on sheltered sites are much less glaucous than those on exposed sites, irrespective of whether the shade is due to aspect, vegetative cover or side shade. Clearly then, provision of an ashbed and minimum shelter from retained trees are key requirements for the reliable regeneration of alpine ash, though these requirements are less critical on exposed aspects and at lower elevations where the period of snow cover is less.

Prior to the fundamental studies of Grose, difficulty had been experienced in obtaining successful regeneration of alpine ash following logging. On completion of these studies, he initially prescribed a regeneration system involving clearfelling in two stages. While this system was soundly based, some operational problems were encountered in practice.

This led to the adoption of the present system involving clearfelling small coupes (generally 20-40 ha), provision of a receptive seedbed (preferably by an autumn slash burn) followed immediate ly by aerial seeding. Considerably less seed is required when seedbeds are prepared by slash burning rather than by extended soil disturbance. As for mountain ash, this clearfelling system consistently results in successful regeneration and has a high level of operational efficiency. Nonetheless, there are variations to the clearfelling system that meet most of the silvical requirements.

As noted above, Grose (1961) considered that a two-staged clearfelling system could be used to regenerate alpine ash under Victorian conditions. On exposed sites, the system involved a first felling (November - February) and extraction to prepare the seedbed. Retained trees were then sap-rung (March/April) to induce seed fall before being felled and extracted. On sheltered sites, the slash was burnt after the first felling to provide an ashbed which is essential to ensure adequate winter survival of seedlings on such sites. However, difficulties were encountered with this system in practice (Grose 1965). The two-stage felling required close, and hence expensive, supervision. Sap-ringing increased costs and created inflexibilities in the timing of operations such as slash burning. Also seed crops were difficult to forecast and an early break in seasonal conditions could inhibit burning and seed shed on sheltered sites.

Shelterwood systems are inappropriate given the known silvical requirements of alpine ash in Victoria. As noted previously, only spring germinants have any significant potential to become established, and then only if shade or shelter is excluded during the first 6-9 months after germination. A shelterwood system would be particularly disadvantageous at high elevations where snow usually lies on the ground for a considerable period. These problems would be compounded using selection systems. Thus the current system of clearfelling and seeding which meets the silvical requirements of alpine ash in a cost-effective manner should continue to be employed in the management of these forests.

The slide show presented below was developed by Brian Fry. It gives a good overview of the regeneration processes for areas that have been logged..

Alpine Ash Slide Show (Developed by Brian Fry - note that this slide show was developed some time ago and does not reflect current OH&S standards.)