What follows is an extract from a 2013 publication by Arnis Heislers, which was republished by Epic ArtWorkz in 2016. Arnis graduated from the Victorian School of Forestry in 1960 and, like many other graduates, the first stages of his working life with the FCV were concerned with assessing and mapping timber resources. The full publication is available on this site, and it contains wonderful photographs recording his time in alpine forests.

At the end of 1960, I began work with the Assessment Branch of the Forests Commission. It was a great opportunity to experience new country in a variety of settings. Summers were spent in the Alps, after which we retreated to the lowlands. Our task was to assess the volumes of merchantable timber present and map the stands. That was achieved by traversing the forest and measuring sample plots on a grid-like basis, while mapping vegetation boundaries. In the alps we worked in remote locations with limited vehicular access and no established accommodation. Hence we established temporary camps under canvas for our needs

The task was to assess Alpine Ash stands in the headwaters of the Wonnangatta River valley, depicted in the map on page seven. A jeep track was constructed to the lower slopes of Mt Speculation to provide access, which ran from the logging road in the King Valley and past Mt Koonika. A short track was also constructed to above the Catherine Saddle. These tracks were rudimentary 4wd tracks, unlike the current road network depicted on the map. Our water supply was from Camp Creek, near which we established our kitchen and washing facilities. Our tents for sleeping were upslope among the Snow Gums from where the views were stunning into the Wonnangatta Valley and across to spectacular mountain peaks along the Great Dividing Range, now on the Alpine Walking Trail in the Alpine National Park. Even in those days it was a popular walking route, but walkers were not frequently encountered.

Preliminary work included measuring trees in a nearby area being logged to establish what timber volumes different sized trees yielded, after allowances were made for defects such as decay. We stayed at the Forest Commission’s Mirimbah base at the foot of Mt Buller while doing that.

We were ready to begin the assessment after the preparations were completed in late January. We had established our camp and a marked traverse or base line running down the valley from Catherine Saddle. Plots would be measured at set distances along compass lines running at right angles to this base line. The Australia Day weekend provided a welcome break, but on arrival back ready for work we were told that we were needed to help control an out of control fire in the Jamieson area. That occupied us for over a month and left little time to complete the assessment before winter. Extra crews joined us so we could do that. The work days were arduous and long, at times requiring a scramble up cliff faces and a long return to base in darkness. 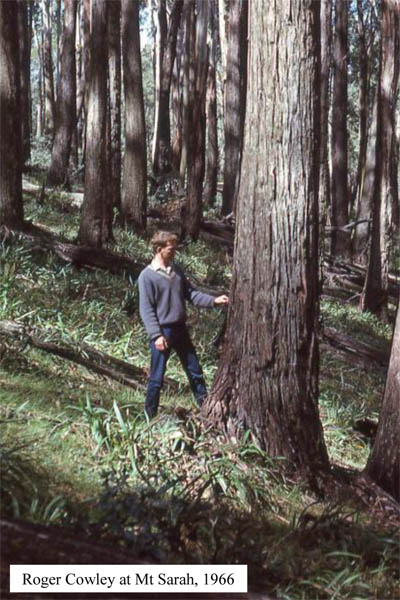