Transcribed from Jim’s notes and as related to Malcolm McKinty

Following his graduation from the VSF in 1936 and until December 1941 Jim was attached to the Commission’s Forest Assessment Branch.

In November 1938, Bjarne Dahl, Jim (then 23 years old) and their chainman (Fred) travelled by train to Healesville then by car to Sylvia Creek near Toolangi. There they loaded their equipment onto packhorses lead by Bill O’Connell and trekked over the hills to the Murrindindi River where they set up camp. The task was to map a large section of the Victoria Range between the Yea and Acheron Rivers, progressing south along the range towards Mount St Leonard. Dense scrub here made heavy going and they took turns with slashers to clear the survey lines.

Increasingly hot weather made the team cautious and they set to track clearing around their camp and making rakes. By mid-November, there were signs of fire in the district. In December bushfires again occurred around the State and on the 9th, a high wind with red dust and rain came up. Later in the month the assessors experienced cold, wet weather alternating with heat. On the 20th a heavy smoke pall from fires at Gembrook covered them.

After spending the Christmas break in Melbourne, Bjarne, Jim and Fred returned to the head of the Murrindindi River south-east of Toolangi to complete the final stage of their survey. Their camp was by this stage beside the river just north of Mount Monda and was surrounded by dense scrub. Although they had only a relatively small survey to complete, the density of the Prostanthera scrub delayed progress. It was so dense in places that they resorted to dropping dry spars across the tangled mass so that they could crawl over it.

In the first days of January, the heat started to build up. Previous summers had been similarly hot and dry so there was no real appreciation that this summer would be any worse and the expectation was that any fires would be a problem for a day or so before rain put them out.

Sunday January 8 was the last day available to complete the survey as O’Connell’s pack-horse team was to meet them on the Monday. They had an early start. Initially the weather looked as if it would rain; then came the heat – like a furnace. Working on the eastern flank of Mount St Leonard, they saw smoke in the north-west, in the direction of Sylvia Creek. The smoke hid the sun providing some relief from the heat. They became very uneasy.

After lunch they saw a huge fire burning about a mile north of their campsite. They completed the day’s work (10 hours, 210 chain of survey) then quickly returned to camp and packed and waited out the night to see what would happen. Between 6.30pm and midnight, Jim attempted to reconnoitre the fire location from the ridge over Hardy’s Creek – the Black Range was ringed by fire and he could hear trees falling continually. Taking only their personal gear, the crew returned to the ridge, sleeping fitfully between sharing watch. The wind held slightly from the south-west overnight so the fire ran through the forest just to the north of their camp. They could hear the crashing of falling trees across a gully about half a mile away. After 4am Monday 9th January, the wind was still holding from the west, they returned to camp for breakfast then carried all their gear to the pick-up point on Hardy’s Creek.

At 11.30am, O’Connell’s pack-horse team emerged out of thick smoke, assisted by three boys (it was doubted that anyone older would be silly enough to enter the bush under these conditions). They walked non-stop to Sylvia Creek then followed a bullock track to the Myers Creek (Toolangi - Healesville) Road where they were met by Welsh in a truck from Broadford.

Welsh informed them of the deaths on the 8th of Toolangi District Forester Charles (Charlie) Demby and Forester John (Jack) Barling who had become trapped at Toolangi. They had been escaping the fires with Demby’s family along a tram line when Barling fell behind; Demby went back for him while the family continued to flee. Demby was carrying Barling when the fire caught them.

Bjarne Dahl left with Welsh in the truck to take their camping equipment to the next job at Mt Disappointment near Broadford. Jim and Fred remained as they had a small amount of work to complete the survey. They walked down Myers Creek Road to ‘Bethany’ - a guesthouse in the Myers Creek valley; O’Connell carted their bags there.

Dawn next morning (Tuesday 10th) came with a red sun, dense smoke and a north wind. Jim and Fred climbed up on to the Mount St Leonard ridge to assess the situation. However, the density of the smoke was such that Jim decided to retreat to the guesthouse where he undertook paperwork. Later that morning he travelled to Healesville – ash was falling in the street. Charles Demby was buried that morning. Jim returned to Bethany by lunchtime.

In the afternoon the wind chopped and changed and from 2pm fire erupted from Chum Creek to the west. Jim took charge. They initially tried to hold the fire along the Myers Creek Road near the guesthouse. It roared up the valley towards Mt St Leonard; the flames reaching 100-foot high when it merged with the fire from the Mount Monda side. At one stage they took refuge by lying in the table drain against the high side-cut (batter) of the road. They then returned to the guesthouse and focussed first on saving buildings then on putting out smouldering fence-posts and stumps, working continually late into the night. A car and sheds were lost at the guesthouse. One lady, a grandmother from a Western District farm, carried water in jerry to put out small fires.

On returning to Melbourne head office on the Wednesday Jim found that he was posted as missing; the first Commissioner he met greeted him with “Oh God, I thought you were dead”.

The next day Jim and his chainman were sent to East Warburton where they were billeted in the guesthouse.

They were now in front of the fire.

On Friday January 13 (Black Friday) Jim joined a gang of field staff to help protect town property from the fire that was expected to run up the Acheron Valley from the north. They slashed, raked and chipped lines through the undergrowth to make it ready for back-burning but the wind was too strong for the fires to be lit. Word came that Warburton had been nearly burnt out. They went down to the Yarra River but the blaze had already crossed both the river and road.

The wind chopped to the west causing the main fire to build and crown through the forest with a wall of flames 150-foot high to ignite spots throughout the township and surrounding land. The ground fire followed some minutes later. Livestock were frantic. Work was focussed on saving buildings in the half-light caused by the smoke. They could hear the high-pitched roar of the crown fire that went on the destroy Matlock and Woods Point.

As no uniforms or protective clothing were available Jim, like most other firefighters, wore ordinary clothes and a felt hat. He also carried the-then new four-gallon knapsack-spray-pump and managed to keep refilling it so that he could use two gallons on the fire and keep two for his own protection. Jim put in 16 hours of front-line work that day and emptied the knapsack many times. A reporter from one of the Melbourne newspapers photographed Jim at 3pm in the gloom caused by the dense smoke.   They returned to the guesthouse to find that all their gear had been removed. 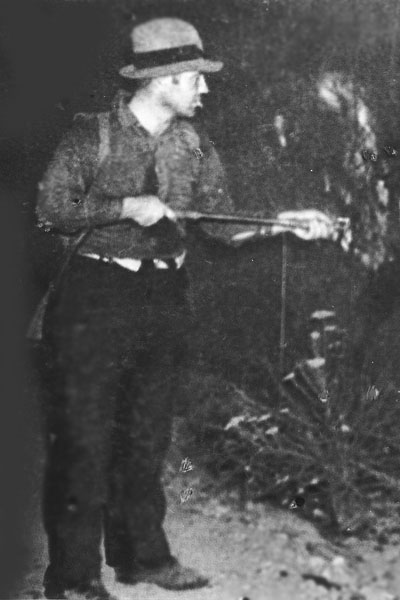 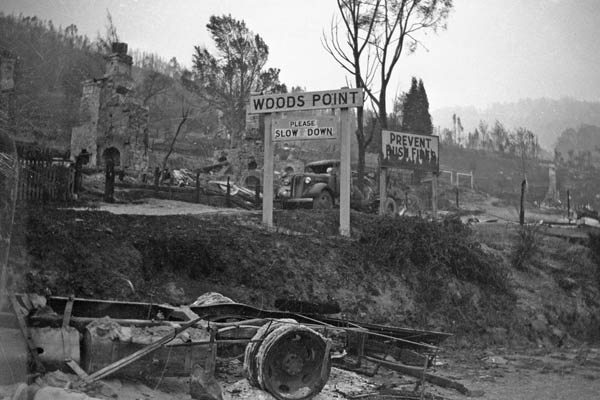 On the Saturday word went out that the Woods Point community had suffered some deaths and the survivors were without food and shelter. The road from the Yarra River side was littered with trees from the fire storm. Jim got a lift in a timber truck to McVeigh’s Hotel (the site of which is now submerged under the Upper Yarra Reservoir) and joined a team of several hundred who worked continuously from about midday for 36 hours to open the road from McVeigh’s up to Fitzpatrick’s mill. They used “brute force” on axes and saws and to push logs off the road. They covered 14 miles. One of the trees across the road was so large that, even with the longest cross-cut saw available (about 10 to 12 foot), the saw could only be jiggled slightly to work through the log; heavy jacks were used to push it over the bank.

There appeared to be not a living thing in the Matlock country. They found a few burnt-out cars; one where a man had sheltered against the batter with only a hat to protect his head – he survived but lost the tips of his ears to charring. Along the road were burnt-out sawmills; one where a man had survived by sheltering beside the sawdust heap; another where a man’s boiled remains were found in an elevated water tank. Fourteen were found dead at Fitzpatrick’s. They had almost reached the top of the range when a party walked down the road to say that a crew had made it through from the Mansfield side and had provided the necessary relief to Woods Point. The crew from the south was very dejected. On returning to McVeigh’s they found only the hotel; there were no houses left.