Jim attended the Victorian School of Forestry from 1957–59 and completed his Bachelor of Science in Forestry at the University of Melbourne in 1962-63. His early forestry career saw postings to Casterton Forest District, the Phasmid Survey program in north east Victoria, the Barmah FD and then Orbost FD in 1964.

Following an accident to the then VSF Principal, Bill Litster, in 1966, Jim was transferred from Orbost to Creswick as a Lecturer and taught Silvics, Silviculture and Statistics over his term of 1966-68.

During 1968 Jim transitioned from completing his lecturing commitments to establishing and managing the first Creswick Forest Research Station which focused on native forest silviculture and growth modelling. Jim’s transition into native forest research was put on hold when, in the early 1970’s, he was awarded a Rockefeller Fellowship at the Institute for Environmental Quality and School of Natural Resources at the University of Michigan, Ann Arbor, USA. Jim’s studies and research in the areas of natural resources economics and modelling eventuated with him achieving his PhD (Thesis title: A multiple objective approach to planning the use of public forest lands. University of Michigan, 612 pp.).

On his return to Australia in 1975 Jim continued to expand field research at Creswick and across Victoria until he was appointed Principal at VSF in 1978, and he remained in this role from 1978 to 1981. During this period, he oversaw the graduation of the first female VSF students and the last VSF Diploma graduates, while also managing the transition of the VSF Diploma course to joint FCV University of Melbourne operations and the full University Bachelor of Forest Science Degree course.

After managing this transition, Jim left the FCV and was appointed Deputy Director General of the then new Ministry of Employment and Training with responsibility for a range of employment programs, TAFE funding oversight and apprenticeship programs. With subsequent State Government changes and re-organisations, Jim was appointed to senior executive positions in new “Business and Employment” and “Industry Services” Ministries.

In 2001, Jim was enticed back briefly into forest research and development in an interim managerial role with the then Centre for Forest Tree Technology, and again found himself involved in the transition of the CFTT from Departmental management into the University of Melbourne “forestry” course.

Jim retired from the Public Service in 2005 and formed an agricultural–forestry consulting company. 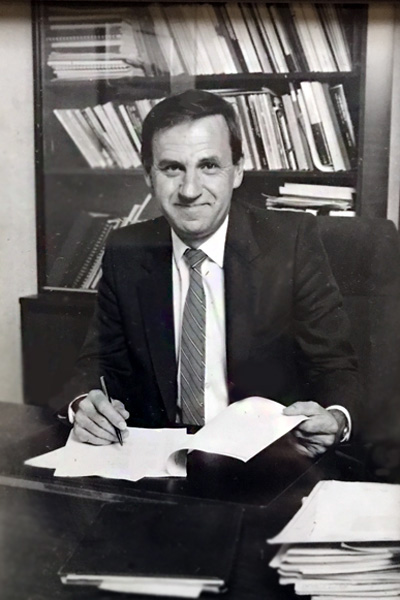